Santander hoses Urshela for last out, O's beat Yanks in 11 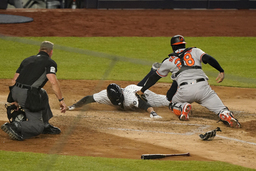 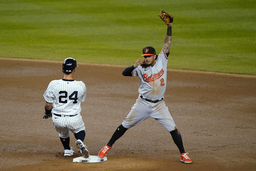 Baltimore Orioles shortstop Freddy Galvis (2) reaches for the throw from the outfield as New York Yankees' Gary Sanchez pulls into second with a double during the sixth inning of a baseball game Wednesday, April 7, 2021, at Yankee Stadium in New York. (AP Photo/Kathy Willens) 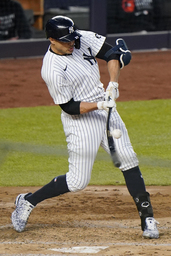 New York Yankees designated hitter Giancarlo Stanton grounds into a double play with two runners on base in the third inning of the team's baseball game against the Baltimore Orioles, Wednesday, April 7, 2021, at Yankee Stadium in New York. (AP Photo/Kathy Willens) 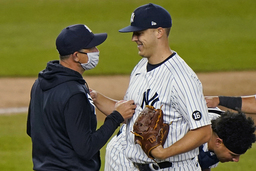 New York Yankees starting pitcher Jameson Taillon smiles after giving the ball to manager Aaron Boone, left, during the fifth inning of the team's baseball game against the Baltimore Orioles, Wednesday, April 7, 2021, at Yankee Stadium in New York. Taillon made his first start in the majors since May 1, 2019. (AP Photo/Kathy Willens) 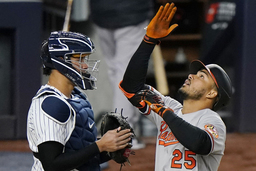 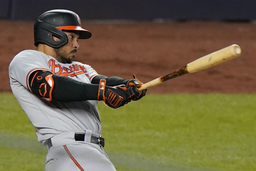 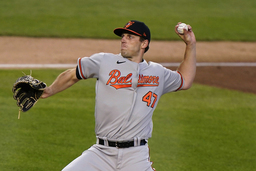 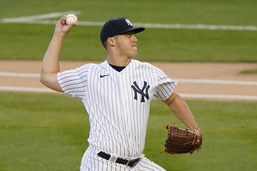 NEW YORK (AP) Anthony Santander delivered a dart from right field, a game-saver to home plate for the Orioles.

He might not have had the chance if Yankees shortstop Gleyber Torres had gotten a routine throw across the diamond an inning earlier.

Santander threw out Gio Urshela trying to score on a fly ball in the 11th, moments after pinch-hitter Chance Sisco's go-ahead single in the top half, and Baltimore beat the New York Yankees 4-3 Wednesday night.

Brett Gardner bunted Urshela, the automatic runner, to third to open the inning. DJ LeMahieu then ripped a liner to right. Santander set himself, caught it and delivered a perfect throw home, a couple steps ahead of Urshela, who slid face first into catcher Pedro Severino's tag.

It was the second laser home from Santander in the game, but he came up just short trying to get Tyler Wade in the 10th. Santander also homered in the fifth.

Baltimore did not make Santander available to reporters after the game.

Wade's run might have been the winner if not for Torres' blunder in the top of the 10th. The 24-year-old skipped a throw past first baseman Jay Bruce on a two-out grounder by the slow-footed Severino, allowing Santander to score from third.

Torres has two errors this season after tying for the AL lead among shortstops with nine last year. He took over the position in 2020 after Didi Gregorius became a free agent.

''I think the important thing is to continue to reinforce a lot of the good things, a lot of the progress that he legitimately has made,'' manager Aaron Boone said, adding ''he has all the capabilities to be able to go out there and do it.

''You have a high-profile miscue or something, you have to be able to work past that.''

Sisco's one-out hit off Chad Green (0-1) scored Rio Ruiz from third following a sacrifice bunt by Freddy Galvis. It was Baltimore's first hit since the fifth inning and its fourth total - New York had 13, but only three with runners in scoring position.

Cesar Valdez (1-0), working primarily with a 76 mph changeup, pitched 2 1/3 innings and got Baltimore through the 10th. Paul Fry got his first save, ending a 3-hour, 54-minute night.

The Orioles dropped the series' first two games after winning three straight in Boston to open the season. This win ended a franchise-record 12-game skid at Yankee Stadium and improved the club to 4-25 in its past 29 against New York.

''I felt fortunate,'' Hyde said. ''You get four hits through 11 innings against the New York Yankees, you're not usually going to win. Credit goes to our guys for battling.''

Prior to Sisco's hit, New York relievers pitched six perfect innings - except for Torres' error - following a sharp pinstripe debut for Jameson Taillon, who started for the first time in 707 days.

In the bottom of the 10th, Kyle Higashioka scored pinch-runner Wade from second with a sharp single to right - Wade slickly slid around Severino, touching his left hand on the plate as he went by.

Cedric Mullins and Santander homered for Baltimore in the fifth, accounting for two of its three hits prior to the 11th. Baltimore struck out 17 times, brining its total to 44 for the series.

Urshela rallied New York with a tying double in the eighth inning, scoring pinch-runner Mike Tauchman from first. Urshela appeared shaken up after sliding into Severino in the 11th, but Boone said he was OK.

Yankees slugger Aaron Judge was held out of New York's lineup with soreness in his left side a night after he had a homer, three hits and four RBIs against Baltimore. The Yankees are off on Thursday, giving the right fielder two days to rest.

Mullins has hit safely in each of Baltimore's first six games, going 12 for 25.

Baltimore left-hander John Means surrendered a run over 4 2/3 innings, his sixth straight start allowing one-or-fewer runs. That matched Hall of Famer Jim Palmer for the longest such streak with Baltimore. Means gave up seven hits and two walks and struck out four.

Taillon struck out seven, allowing three hits and no walks - he only faced a trio three-ball counts out of 17 batters.

The right-hander hadn't pitched since May 1, 2019 - then with Pittsburgh - due to a second Tommy John surgery. Momentous comebacks are hardly new for the 29-year-old. His career was also slowed by a hernia operation in 2015 and surgery to treat testicular cancer in 2017. Additionally, he was hit in the head by a line drive in April 2019, although he remained in the game.

''It's going to sound cheesy, but I'll never take a day in a big league uniform for granted, that's for sure,'' Taillon said.

Yankees players, coaches, field and support staff were vaccinated at the stadium Wednesday. The team didn't disclose how many players were inoculated, but manager Aaron Boone said before the game he anticipated the team easily clearing the 85% threshold mandated by Major League Baseball for teams to begin easing certain health and safety protocols.

Orioles: Hyde said OF DJ Stewart (left hamstring strain) is making progress but doesn't have a projected return date yet.

Yankees: Boone wasn't certain that Judge would return to the lineup Friday at Tampa Bay. ... 2B Rougned Odor wasn't in uniform Wednesday, a day after being acquired from the Texas Rangers. ... LHP Justin Wilson (shoulder soreness) is expected to be activated when he's eligible on Friday. Until then, New York will carry only 25 players.

Orioles: RHP Matt Harvey (0-0, 3.86) gets the ball in Baltimore's home opener against Boston. The Red Sox will start LHP Eduardo Rodriguez (19-6, 3.81 in 2019), pitching for the first time since missing last season with a COVID-19-related heart condition.