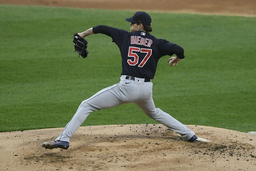 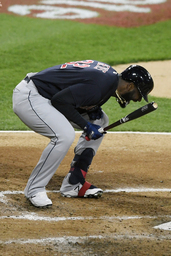 Cleveland Indians' Franmil Reyes reacts after striking out during the fourth inning of a baseball game against the Chicago White Sox Tuesday, April 13, 2021, in Chicago. (AP Photo/Paul Beaty) 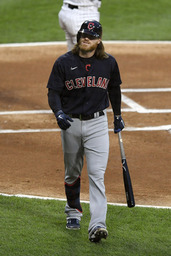 Cleveland Indians' Ben Gamel reacts after striking out during the first inning of a baseball game against the Chicago White Sox Tuesday, April 13, 2021, in Chicago. (AP Photo/Paul Beaty) 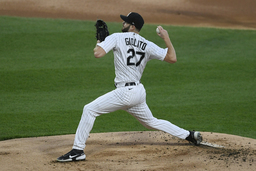 CHICAGO (AP) Shane Bieber wasn't sure where this ranked among his best performances. The AL Cy Young Award winner knew it was high on the list.

Bieber pitched three-hit ball over nine innings for Cleveland while Lucas Giolito nearly matched him before the Indians broke through in the 10th to beat the Chicago White Sox 2-0 on Tuesday night.

The matchup between All-Star aces sure lived up to its billing.

''I guess it was a big one,'' Bieber said. ''It's special to me. It was great to know that tonight's matchup was kind of as advertised and we were able to come out on top.''

''I thought he was tremendous,'' manager Terry Francona said. ''You pick the adjective and you can put my name to it. I thought that was one of the best-pitched games on both sides that I've seen in a long time. Those are two of the best. Biebs did a heck of a job.''

''These types of games are the ones I remember, the ones that I really enjoy,'' he said.

Giolito also allowed only three hits and fanned eight. He was pulled after issuing his second walk to begin the eighth inning. Bieber walked one.

''The way Bieber was pitching tonight, I didn't have to wait in the dugout very long to get back out there,'' Giolito said. ''So it was like full go. Every inning, we were both putting up zeros. It was just a battle, and it's pretty exciting, pretty fun. Just had to stay within myself.''

Garrett Crochet (0-2) came on in the 10th for Chicago and catcher Yasmani Grandal interfered with Josh Naylor leading off, putting runners on the corners.

After pinch-hitter Yu Chang flied out, Roberto Perez drove in a run with an RBI single. Pinch-hitter Amed Rosario added an RBI double.

Bieber struck out at least eight in his 15th straight game, breaking Corey Kluber's club record in 2017. He fanned five in a row at one point, and 85 of his 113 pitches were strikes.

''I think early in the game it was pretty clear and obvious that they weren't trying to get deep into counts and they were trying to be aggressive, and fortunately, I was able to kind of find my stuff from the get and force contact,'' Bieber said. ''And we got an incredible defense.''

James Karinchak worked the 10th for his first save, retiring Jake Lamb on a game-ending fly to the right-field warning track.

Eddie Rosario had two of Cleveland's three hits against Giolito - a double in the second and an infield single in the fourth.

Chang shared some anti-Asian tweets he received after making a throwing error in the ninth inning that allowed the winning run to score in the Indians' loss Monday night.

Chang, who is Taiwanese, posted some of the tweets on his account while asking for tolerance. Soon after, he received an outpouring of support from Indians fans and others.

''Both of them were making high quality pitches the whole night. There are good hitters in both lineups. We expected it, that's what we got. We wanted to win the game. That's disappointing. It's not difficult to admire quality like that when it's on either side.''- White Sox manager Tony La Russa.

Indians: Perez apparently got crossed up by Karinchak and got hit in his right ring finger by a pitch. Perez rose as if he was expecting a high pitch.

The four-game series continues with LHP Carlos Rodon (1-0, 0.00 ERA) pitching for Chicago after being scratched from Monday's start because of an upset stomach and RHP Zach Plesac (1-1, 1.38) getting the ball for Cleveland. With Rodon ill, Dallas Keuchel pitched into the sixth inning Monday after having his turn moved up two days.