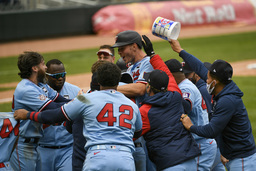 Minnesota Twins' Max Kepler, center with helmet, celebrates with his team after driving in the winning run in the ninth inning of a baseball game against the Boston Red Sox, Thursday, April 15, 2021, in Minneapolis. The Twins won 4-3. (AP Photo/Craig Lassig) 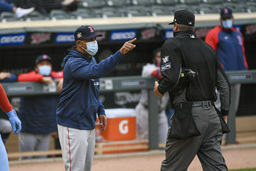 Boston Red Sox manager Alex Cora, left, is ejected by umpire Jordan Baker as he argues a call in favor of the Minnesota Twins during the eighth inning of a baseball game, Thursday, April 15, 2021, in Minneapolis. (AP Photo/Craig Lassig) 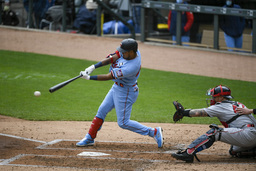 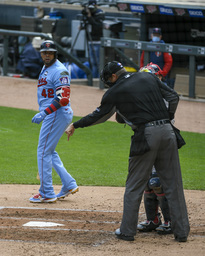 Minnesota Twins' Jorge Polanco, left, is surprised by home plate umpire Jordan Bakeer'scall that he was over the plate when he was hit by a pitch and could not advance to first during the second inning of a baseball game, Thursday, April 15, 2021, in Minneapolis. (AP Photo/Craig Lassig)

Minnesota Twins' Miguel Sano, right, is safe at first as the ball bounces out of Boston Red Sox first baseman Bobby Dalbec's glove on a throwing error during the third inning of a baseball game, Thursday, April 15, 2021, in Minneapolis. (AP Photo/Craig Lassig) 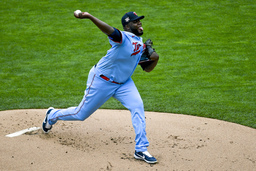 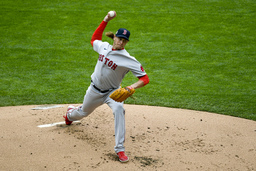 MINNEAPOLIS (AP) Max Kepler delivered the sigh-of-relief winner for Minnesota on the last day of a rough first homestand of the season.

The Boston Red Sox relentlessly kept the Twins from being comfortable all series.

Kepler's bloop RBI single in the bottom of the ninth inning gave Minnesota a 4-3 victory Thursday over Boston - stopping a five-game losing streak for the Twins and breaking a nine-game winning string for the Red Sox.

Luis Arraez, ever the team sparkplug, let those emotions loose as he raced home on Kepler's hit off Adam Ottavino (1-1) and belly-flopped into home plate.

The Twins avoided matching their longest losing streak in three years under Baldelli, a six-game slide from July 31-Aug. 5, 2020.

The Red Sox, who tied it in the eighth on Alex Verdugo's three-run double, were on their longest winning streak since a 10-game run in 2018, the season they won the World Series.

''We ended up losing a game with a jam shot to center field. That's not bad,'' said manager Alex Cora, who was ejected for arguing in the eighth. ''We just beat the American League Central champions, three out of four. We've been playing good baseball.''

Alex Colome (1-1) pitched a scoreless ninth for the victory, despite a one-out double by Christian Arroyo. Verdugo capped a 10-pitch at-bat against Taylor Rogers with his two-out double in the eighth that made it 3-all. The Red Sox had loaded the bases against Hansel Robles.

Five times during their winning streak, the Red Sox rallied from a deficit in the fifth inning or later.

''It's been fun. I told you guys earlier in the year that this is a sneaky good team,'' said Garrett Richards, who stretched Boston's streak of 10 straight games with the starting pitcher completing at least five innings. The two runs he allowed were unearned.

Michael Pineda allowed only two singles over seven scoreless innings for the Twins, who had a home run by slump-ridden slugger Miguel Sano in the sixth.

Using his trusty slider to help tame the top-scoring team in the American League, Pineda retired 14 straight batters at one point. He walked one and struck out six, throwing 88 pitches.

''That was just a fabulous outing,'' Baldelli said.

The Twins won two challenges in the second. Christian Vazquez had a hit by pitch become a groundout in the top of the inning, when replays showed Pineda's fastball plunked the knob of his bat. In the bottom of the frame, Sano was initially called out on a slide into second after a fielder's choice grounder to first, but Arroyo's toe came off the side of the base as he leaned forward to catch the relay. Arraez gave the Twins the lead, three batters after the reversal.

Red Sox: DH J.D. Martinez and IF Marwin Gonzalez were out of the starting lineup to rest, four games into a 14-game, 13-day stretch. ''We've just got to be careful with the workload with all those guys,'' Cora said.

Twins: CF Byron Buxton and 3B Josh Donaldson were on the bench as a hamstring precaution. Buxton missed the Wednesday doubleheader, too, when Donaldson returned from the injured list in the second game. ... RHP Shaun Anderson was recalled from the alternate training site in St. Paul, a fresh-arm swap for RHP Cody Stashak, then sent back after the game.

Red Sox: Host the Chicago White Sox in a four-game series starting Friday. RHP Nick Pivetta (2-0, 3.27 ERA) will take the mound for the opener. The White Sox had yet to announce their starter.