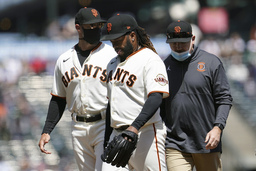 San Francisco Giants starting pitcher Johnny Cueto, middle, walks toward the dugout next to manager Gabe Kapler, left, as he leaves the game during the sixth inning of a baseball game against the Cincinnati Reds in San Francisco, Wednesday, April 14, 2021. (AP Photo/Jeff Chiu) 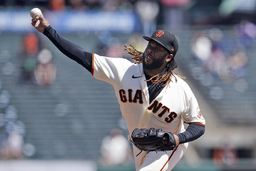 The team said Thursday that Cueto has a Grade 1 strain beneath his pitching shoulder. A corresponding roster move will be made Friday.

Cueto exited in the sixth inning of his start Wednesday against Cincinnati. He wound up as the winner in a 3-0 victory and improved to 2-0 this season.

The 35-year-old Cueto left after striking out Nick Castellanos. The pitcher motioned to the Giants dugout and walked to the clubhouse, accompanied by a member of the training staff.