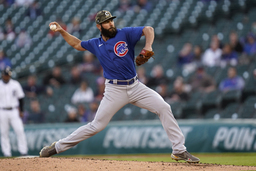 Chicago Cubs pitcher Jake Arrieta throws against the Detroit Tigers in the fourth inning of a baseball game in Detroit, Friday, May 14, 2021. (AP Photo/Paul Sancya) 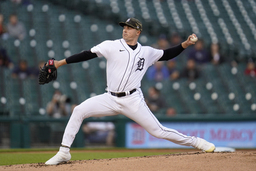 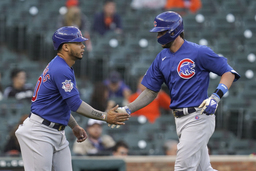 Chicago Cubs' Kris Bryant, right, celebrates his two-run home run with Willson Contreras against the Detroit Tigers in the third inning of a baseball game in Detroit, Friday, May 14, 2021. (AP Photo/Paul Sancya) 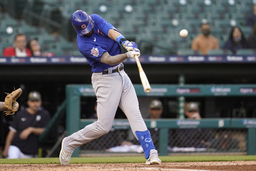 Chicago Cubs' Kris Bryant hits a two-run home run against the Detroit Tigers in the third inning of a baseball game in Detroit, Friday, May 14, 2021. (AP Photo/Paul Sancya)

DETROIT (AP) Kris Bryant homered in his return to the starting lineup. Jake Arrieta came back from a longer layoff and made his presence felt as well.

Bryant hit a two-run homer in the third inning, and the Chicago Cubs went on to a 4-2 victory over the Tigers, snapping Detroit's four-game winning streak Friday night. Bryant dealt with health problems during Chicago's previous series at Cleveland, and Arrieta hadn't pitched at all this month because of a right thumb abrasion.

''It's nice to be back out there in the rotation,'' Arrieta said. ''Look forward to just rolling with this group and being out there every five days.''

Arrieta (4-3) faced the minimum number of hitters until the bottom of the sixth, when Detroit's Jake Rogers and Robbie Grossman hit consecutive home runs with two out. That was all the scoring for the Tigers, who entered the night with the second-worst record in baseball, percentage points ahead of Minnesota.

Joc Pederson had three hits for the Cubs, who snapped a three-game losing streak.

Arrieta allowed two singles and a walk through the first five innings, but each of those baserunners was immediately erased by a double play. He was taken out after the sixth. Three Chicago relievers went an inning apiece.

Craig Kimbrel struck out of the side in the ninth for his seventh save in eight chances.

Bryant was removed from Tuesday's game because of a sinus issue, and when he pinch-hit the following day he was hit on the left hand by a pitch. He was healthy enough to start Friday, and he opened the scoring with his 10th homer of the season.

The Cubs added two more runs in the fifth. Anthony Rizzo hit an RBI double, and Javier Baez made it 4-0 with a run-scoring single.

Skubal struck out five with one walk, and he ended on a decent note with a perfect sixth against the bottom of the order.

''That sixth inning, I don't know how many pitches it was, but I went right after guys,'' Skubal said. ''Got some soft contact and was able to get through six innings.''

Arrieta was activated from the injured list before the game. He allowed seven runs in 3 1/3 innings in his previous start April 30 at Cincinnati.

Arrieta got the first two outs of the sixth before Rogers hit his first home run of the year.

''I felt good today,'' Rogers said. ''A big thing for me today was just kind of relax up there and let the pitcher provide the power.''

This win snapped a streak of seven straight one-run games for the Cubs. It was the first time that had happened since they had eight in a row during a stretch in August 1996.

''It was nice,'' manager David Ross said. ''Felt like we had breathing room when you've got the bullpen coming out, throwing the way they were throwing.''

The Tigers re-signed right-hander Franklin Perez to a minor league contract after he cleared unconditional release waivers. Detroit released Perez - a key part of the 2017 deal that sent Justin Verlander to Houston - earlier in the week.

Chicago sends RHP Trevor Williams (2-2) to the mound Saturday against Jose Urena (1-4) of the Tigers.