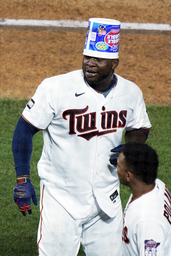 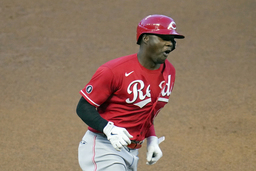 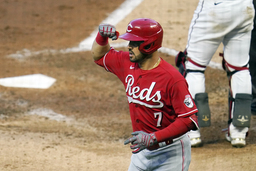 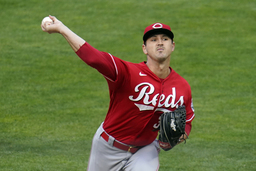 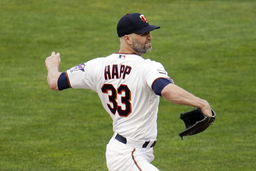 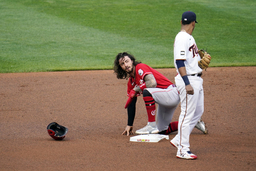 Cincinnati Reds' Jonathan India, left, loses his helmet as he steals second base against Minnesota Twins' Jorge Polanco in the first inning of a baseball game, Monday, June 21, 2021, in Minneapolis. AP Photo/Jim Mone)

Their best winning streak of the season is still going, but center fielder Byron Buxton has been sidelined once again.

Miguel Sano hit a two-run homer in the 12th inning to lift Minnesota past Cincinnati 7-5 on Monday night - the fifth straight victory for the Twins and fifth loss in a row for the Reds.

With a runner on third and Cincinnati playing a five-man infield, Sano hammered a 3-1 slider from Heath Hembree (1-3) over the wall in left-center. It was Minnesota's fourth consecutive extra-innings win after eight straight losses in extras to start the season.

''Just trying to find one pitch that's really good and trying to hit it,'' Sano said.

The game lasted 5:14 and ended 30 minutes past midnight, after beginning on a somber note with a remembrance of the late Mike Bell - the former Reds player and Twins coach who died of cancer this year. Bell was the younger brother of Cincinnati manager David Bell.

After being hit by a 94 mph fastball from Reds starter Tyler Mahle in the fourth, Buxton played one more inning before being pulled - and diagnosed with a broken left hand. He could miss a month or so, a crushing blow to an oft-injured player who missed 40 games with a strained right hip before returning to action on Saturday.

''This isn't fair. That's how I feel about the whole thing,'' Twins manager Rocco Baldelli said.

Matt Shoemaker (3-8), whose struggles as a starter prompted a recent demotion to the bullpen, pitched two hitless innings for the win. Shoemaker loaded the bases in the 12th after two walks, one intentional, but struck out Eugenio Suarez - who had a homer and three RBIs - to escape.

''It's definitely an adjustment being used to starting, but that's where I am and I'm going to own it and do my best and be great at it,'' Shoemaker said.

The late innings were quite the testament to endurance and resilience, with a bit of unstable relief pitching mixed in - and stranded runners galore.

Nick Castellanos, in a 5-for-26 slide, gave the Reds the lead with a single in the 10th against Jorge Alcala for his first RBI in eight games. Suarez, who had an earlier two-run homer, added a sacrifice fly to turn the game over to Sean Doolittle.

The left-hander gave up an RBI double to Luis Arraez and a sacrifice fly to Trevor Larnach as the Twins sent a game to the 11th inning for the first time this season. They're 3-8 in 10-inning games.

Taylor Rogers allowed two hits to Cincinnati in the ninth, but Jonathan India - who was picked off first base in the seventh - over-slid second as he went headfirst for a double and was tagged for the second out. Rogers struck out Jesse Winker to strand a runner at third.

Minnesota loaded the bases against Lucas Sims in the bottom of the inning, but he struck out Ryan Jeffers looking on a 96 mph full-count fastball that caught the lower outside corner. Sims then retired Andrelton Simmons on a forceout.

The Twins held a pregame remembrance for Mike Bell, their well-liked bench coach for the 2020 season who died at age 46 on March 26 of kidney cancer.

David Bell caught the ceremonial first pitch from Mike Bell's widow, Kelly Bell. The Twins presented the Bell family a signed jersey and a $10,000 donation to a local organization, GiGi's Playhouse, that works for Down syndrome advocacy and support. David Bell's voice cracked as he addressed the crowd with appreciation.

Suarez and Aristides Aquino hit consecutive home runs in the fourth inning against J.A. Happ to bring the Reds back from a 3-0 hole that was started by Nelson Cruz's homer. Happ is 1-3 with a 9.33 ERA over his last eight starts, with 58 hits and 11 home runs allowed in 36 2/3 innings.

Alex Kirilloff singled for the Twins in the eighth and simply ran to an empty second base - the rookie's first career steal - while the Reds nonchalantly prepared for the next batter. The Twins wound up leaving the bases loaded to end that inning.

Cruz has reached base at least once in all 16 games he's appeared in this month, with six homers, 13 RBIs and 10 walks.

Mahle labored through a 38-pitch second inning. Kirilloff's RBI single and Arraez's sacrifice fly followed Cruz's homer. Larnach whiffed with the bases loaded to end the rally. He took three of the eight strikeouts by Mahle, who lasted only four innings.

The Reds went 17 years without any trips to Minnesota in the scheduling quirk of all scheduling quirks, including the first eight seasons of Target Field's existence. Now they've visited the Twins three times in four years. The all-time series is tied at 14.

Reds: RHP Tejay Antone (right forearm inflammation), the team's top reliever, will be strongly considered for activation from the injured list on Tuesday.

Twins: 3B Josh Donaldson (right calf tightness) was out of the starting lineup for the fourth straight game but entered as a pinch-hitter in the eighth.

Reds: LHP Wade Miley (6-4, 2.88 ERA) will take the mound Tuesday afternoon. He has allowed two earned runs or fewer in 10 of his 12 turns this season.

Twins: RHP Bailey Ober (0-0, 3.71 ERA) will pitch to wrap up the two-game series. The rookie has made four starts, with 21 strikeouts in 17 innings and only two walks.