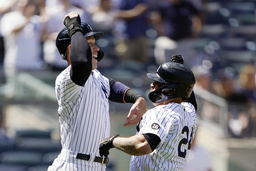 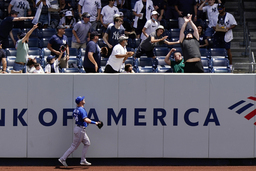 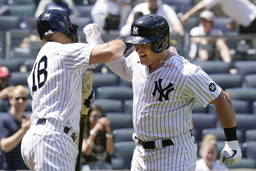 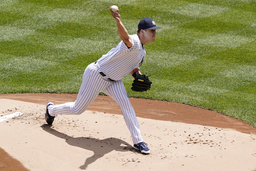 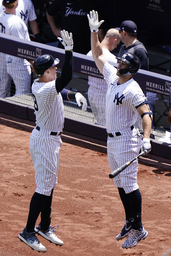 NEW YORK (AP) Yankees hitters have clawed out of an early season slump with a string of clutch, late-game hits.

The Bronx Bombers needed no such fireworks in this one - a start-to-finish shellacking that's inspiring confidence ahead of a weekend series in Boston.

''It's good to see these guys starting to get a little bit of that swagger,'' manager Aaron Boone said.

Aaron Judge homered for the first of his three hits, Gary Sanchez connected for the second straight game and New York got its first blowout victory in a month, beating the Kansas City Royals 8-1 Thursday.

Judge got the Yankees started with a solo shot in the first, Luke Voit had another in the third and Sanchez blew the game open with a three-run drive in the sixth.

New York had not won by more than four runs since a 7-0 rout of the Chicago White Sox on May 22.

The Yankees have won seven of nine, and seven of their eight wins before Wednesday had come via comebacks. Boone admitted it felt like a long time since New York's last easy victory, adding that the morale boost - along with all the rested relievers - could benefit the Yankees at Fenway Park.

''We've obviously played a ton of close games this year, which I believe is going to serve us well moving forward,'' Boone said. ''But it is nice, definitely, to have these types of games.''

New York hasn't played in front of fans in Boston since 2019. The Red Sox swept three games at Yankee Stadium in early June and entered Friday 4 1/2 games ahead of New York for the AL East lead.

Jameson Taillon (2-4) matched a season high by pitching 6 1/3 innings and ended an eight-start winless streak. The right-hander allowed a run, five hits and two walks while striking out six on 96 pitches.

''I thought his curveball was as good as I've seen it,'' Boone said.

Nestor Cortes Jr. finished out the six-hitter with 2 2/3 scoreless innings. Brett Gardner made a sliding catch in center on Whit Merrifield's popup for the final out.

Brad Keller (6-8) allowed four runs in five innings for Kansas City, which was trying to win a series against New York for the first time since 2015. Keller walked four and allowed nine hits, including the homers by Judge and Voit.

''Just felt like I didn't have anything behind my pitches,'' Keller said.

The Yankees have 29 homers in their past 14 games after a notably punchless start to the season - they totaled 11 in the 14 games prior to this stretch.

Sanchez hit a tying homer in the bottom of the ninth Wednesday, setting up Voit's game-ending single in a 6-5 win. He followed up with two hits Thursday, raising his average to .338 in his past 23 games with eight homers and 18 RBIs. The homer was his 13th of the season, second on the team behind Judge's 16.

Judge walked twice and reached base in all five of his plate appearances. Rougned Odor also had three hits.

Sebastian Rivero got his first major league hit for Kansas City with an RBI double in the fifth. Rivero also drew a tying, bases-loaded walk against Aroldis Chapman in the ninth inning Wednesday.

NO EYES UP THERE

Royals third baseman Hanser Alberto lost Odor's third-inning popup in the sun, and it dropped for an infield single. Alberto had sunglasses in the field with him, but had them resting on top of his hat.

A fan ran onto the field during the eighth inning and was tackled almost immediately by a security guard.

Royals: C Salvador Perez was the Royals' designated hitter as planned a day after taking a foul tip off his mask. Perez had a headache and later left Wednesday's game, but it was determined he did not have a concussion. He has played in every game this season.

Yankees: 3B Gio Urshela was held out of the lineup for the second day in a row after being hit in the shin by a pitch. He received treatment early Thursday, and Boone said he was available to pinch hit but not to run the bases.