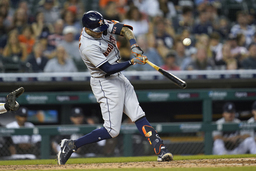 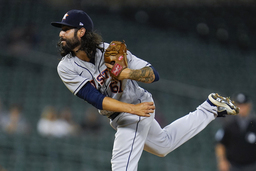 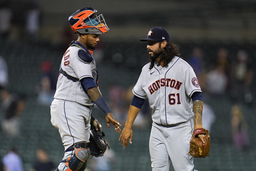 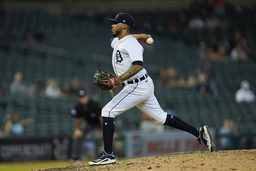 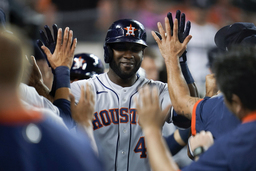 Houston Astros' Yordan Alvarez celebrates after hitting a grand slam in the ninth inning of a baseball game against the Detroit Tigers in Detroit, Thursday, June 24, 2021. (AP Photo/Paul Sancya) 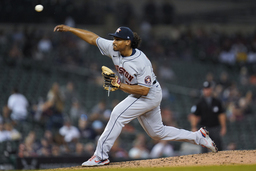 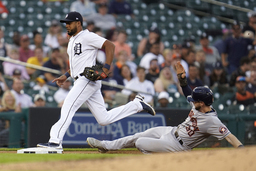 Detroit Tigers third baseman Jeimer Candelario beats Houston Astros' Kyle Tucker (30) to third base for the out in the fourth inning of a baseball game in Detroit, Thursday, June 24, 2021. (AP Photo/Paul Sancya) 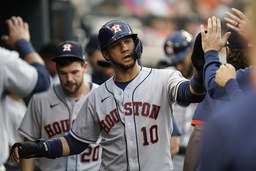 ''This has obviously been a lot of fun,'' Correa said. ''I feel really good, and everyone is getting good at-bats. The pitchers have been great, and we're all making plays.''

''This team expects to win, so they aren't really talking much about a winning streak,'' Astros manager Dusty Baker said. ''We're hitting the ball well and we're getting pitch counts up by the fifth or sixth inning. That's a huge advantage.''

''Everyone is working together to do this,'' Astros catcher Martin Maldonado said. ''We're seeing the ball well and we're getting big hits.''

''I think Luis should be an All-Star,'' Correa said. ''He deserves it with the way he pitches every time he's out there.''

Jose Urena (2-8) retired the side on five pitches in the first inning but threw 77 more without getting out of the fourth. He allowed six runs - four earned - eight hits and two walks in 3 2/3 innings to fall to 0-4 with a 12.89 ERA since returning from a forearm strain on June 6.

''I don't know if it is a physical issue or a mental issue, but he hasn't been the same since the injury,'' Tigers manager A.J. Hinch said. ''Whatever the reason, the way he's throwing is a concern.''

Urena, making his first start since umpires started checking pitchers for grip enhancers, had an 8% drop on the average spin rate on both his four-seam fastball and sinker and a 12% drop on his slider.

''That didn't have any impact on me,'' said Urena, whose spin rates dropped again after being down in his previous start. ''I felt good, but I moved to the third-base side a little, so I think the angle might be the difference.''

Houston loaded the bases with two outs in the second, thanks to two walks and an error, and Maldonado hit a two-run single.

Alvarez hit an RBI grounder in the third and Urena forced in a run when he hit Abraham Toro with a pitch with the bases loaded. It could have been worse for Urena; Robel Garcia hit a line drive off first baseman Jonathan Schoop's glove, but the ball deflected to second baseman Willi Castro, who made the catch.

Detroit loaded the bases in the bottom half, but Nomar Mazara was picked off second by Maldonado from behind the plate, and Harold Castro grounded out.

Correa hit a two-run single in the fifth, and left fielder Michael Brantley robbed Jonathan Schoop of a two-run homer in the bottom half.

''That's a big moment because we're trying to get anything going,'' Hinch said. ''I didn't think it was gone off the bat, but it started carrying. I saw Brantley getting set for a jump, and I just hoped it was going to get over his glove.''

Alvarez hit a grand slam off Bryan Garcia in the ninth, leading Hinch to move shortstop Harold Castro to the mound. Castro has pitched three times this season, accumulating 2 2/3 innings without a hit or a run.

Under the new directive, Castro was checked for illegal substances after finishing the inning.

Detroit and Houston are scheduled to play the second game of a four-game series on Friday, although the weather forecast is for heavy rain. Framber Valdez (4-0, 1.67) is to start for Houston against Detroit's Wily Peralta (0-1, 7.11).