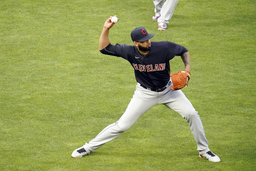 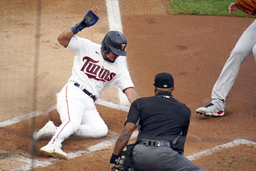 Minnesota Twins' Luis Arraez scores from third base on a wild pitch by Cleveland Indians pitcher J.C. Mejia in the first inning of a baseball game, Thursday, June 24, 2021, in Minneapolis (AP Photo/Jim Mone) 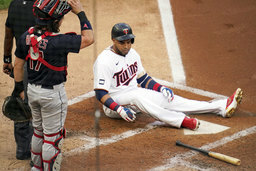 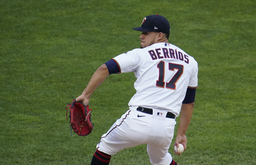 MINNEAPOLIS (AP) Eddie Rosario broke an eighth-inning tie with a two-run single and the Cleveland Indians defeated the Minnesota Twins 4-1 on Thursday night.

Rosario, who spent six seasons with the Twins, was playing his first game in Minnesota since he signed with Cleveland in the offseason.

Austin Hedges and Cesar Hernandez started the eighth with singles off reliever Jorge Alcala (1-2). Amed Rosario then grounded into what was initially ruled a double play, but after a replay review umpires ruled he beat the relay to first.

With runners at the corners and one out, Twins manager Rocco Baldelli elected to intentionally walk Jose Ramirez, the Indians' home run and RBI leader, to fill the bases.

''I love this moment. I love when they change the pitcher for me, lefty-to-lefty, late innings,'' Eddie Rosario said. ''I want to (give) everything I have in this moment.''

Baldelli refused to second-guess his decision to walk Ramirez and have Rogers face Rosario.

''Eddie kind of likes those moments, but I'm going to bet on (Rogers) every time,'' Baldelli said. ''Rog is as good a left-hander out of the bullpen as you're going to find anywhere in baseball ... and in spots like that, he comes up big the vast, vast majority of the time.''

The ex-Twin said he expected Baldelli to make that move.

''I saw Rogers earlier in the bullpen and I know he's coming to me,'' Eddie Rosario said, ''but I'm ready.''

Blake Parker (1-0) earned the win with one scoreless inning of relief. Brian Shaw pitched a perfect eighth and James Karinchak picked up his ninth save with a scoreless ninth inning.

Minnesota manufactured its only run in the first, thanks in part to mistakes by starter J.C. Mejia. Leadoff hitter Luis Arraez capped a nine-pitch at-bat with a base hit. After Josh Donaldson struck out, Mejia walked Trevor Larnach on four pitches.

Nelson Cruz popped out, but then with Max Kepler at the plate, Mejia balked to move up the runners, then threw a wild pitch that scored Arraez.

The Indians tied it in the second on Hedges' two-out, broken-bat single that scored Bradley, who led off the inning with a walk.

Both starters pitched well and posted remarkably similar lines, with neither figuring in the decision. Mejia threw a season-high 96 pitches for Cleveland, giving up one run and four hits while walking two and striking out six over six innings.

''The first couple innings I think he was at 53 pitches after two, and you're kind of like, oh boy,'' Indians manager Terry Francona said. ''But he limited the damage early and then ... he got into a little bit of a rhythm.''

For the Twins, Jose Berrios allowed one run on four hits with two walks and nine strikeouts over 6 1/3 innings.

''He looked sharp. He threw strikes,'' Baldelli said. ''He found ways to get through some of these innings a little bit more quickly as the game went on and became a little more efficient. He gave us a very nice effort.''

Eddie Rosario made his big league debut with the Twins in 2015, hitting a home run at Target Field in his first career at-bat. He was a regular starter and a fan favorite for the next six years. Following the 2020 season, the Twins decided it was time to give young outfielders such as Larnach and Alex Kiriloff a shot, so they didn't offer Rosario a contract.

For his part, Rosario indicated there were no hard feelings about his time in Minnesota coming to an end, and he enjoyed his return to Minneapolis.

''Before we started the game I was really excited. I know I've had many good moments here in Target Field,'' he said. ''But my focus right now is to play my game and help my team to win games. Not thinking too much for the other side. I want to have fun in Cleveland.''

After his big hit in the eighth, Rosario did flip his bat and took a quick look into the Twins dugout. But he insisted that was nothing personal.

Indians: Francona said RHP Aaron Civale (finger) would be shut down for 10 to 14 days before he begins a throwing program. The AL wins leader is expected to miss at least a month after being placed on the injured list Thursday. . OF Franmil Reyes (abdominal strain) and C Roberto Perez (finger) began rehab assignments at Triple-A Columbus on Wednesday. . Hedges returned from concussion protocol and was in the starting lineup.

Twins: RHP Randy Dobnak was placed on the 10-day IL with a strained middle finger on his pitching hand. . Baldelli said CF Byron Buxton is not expected to need surgery on his broken left hand.

The Indians will send RHP Cal Quantrill (0-2, 2.74 ERA) to the mound to face the Twins on Friday night. Dobnak had been slated to start for Minnesota; he'll be replaced by lefty Danny Coulombe, who will be recalled from Triple-A St. Paul to make the start.