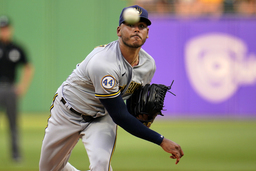 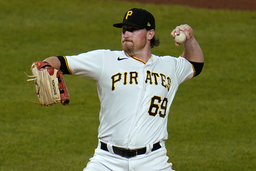 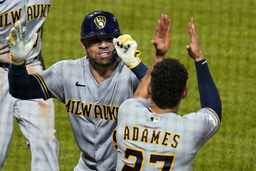 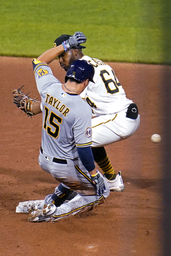 Milwaukee Brewers' Tyrone Taylor (15) slides safely into second with an RBI double as the relay throw gets past Pittsburgh Pirates second baseman Rodolfo Castro during the sixth inning of a baseball game in Pittsburgh, Thursday, July 29, 2021. (AP Photo/Gene J. Puskar) 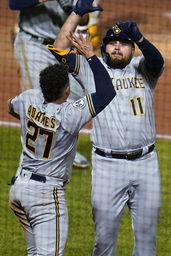 Pina hit his sixth home run of the season off reliever Chris Stratton to cap a five-run sixth inning for the Brewers. He added a two-run homer in the eighth.

The Brewers outscored Pittsburgh 28-3 while sweeping the series. Milwaukee has won five of its last six and increased its lead over second-place Cincinnati to seven games in the NL Central.

''A very good day,'' Pina said. ''Happy for me, for the team, too. Winning, that's the most important thing. Keep winning, keep getting closer to the playoffs, that's the goal.''

Milwaukee starter Freddy Peralta (8-3) allowed only two hits and three baserunners. He struck out five and needed just 68 pitches to get through six innings.

In the fifth, Willy Adames beat out an infield single and scored on a Rowdy Tellez double that chased Pittsburgh starter Chad Kuhl (3-6).

Tyrone Taylor followed with an RBI double, Lorenzo Cain walked and Pina hit a drive to the second row of seats in the bleachers in left.

Tellez added a solo home run in the seventh off Stratton, an estimated 410-foot blast to the visitor's bullpen in left-center.

Kuhl yielded three runs on six hits in 5 1/3 innings and struck out five. Stratton gave up four runs on four hits in 1 1/3 innings of relief.

Pina's second home run came after Cain reached on an error in the eighth. It was the second multi-homer game of Pina's career. He finished 3 for 5.

Cain hit a two-run single and Pablo Reyes roped an RBI double in the ninth off usual Pirates first baseman John Nogowski, who pitched with the game already out of hand.

Peralta was pulled despite a lower pitch count for the second straight start because the Brewers are trying to save some innings on the 25-year-old's right arm.

''We're just trying to conserve innings as we go,'' manager Craig Counsell said. ''He threw 50-some pitches last time, a little more this time and he'll be full go next time. We were hoping to be a little shorter today. The way the game played out, it worked out.''

The Pirates have lost eight of their last 10, while trading away Tyler Anderson, Clay Holmes and All-Star Adam Frazier, but Kuhl said the lack of on-field results isn't solely because of the players no longer in the Pittsburgh dugout.

''A lot of young guys are going to get an opportunity now,'' he said. ''It's being handled very well right now by the guys in that room. We just ran into a hot team.''

Brewers: 1B Daniel Vogelbach (left hamstring strain) will start a rehab assignment with Triple-A Nashville on Friday. Vogelbach has been out since June 22.

Pirates: LHP Steven Brault (left lat strain) made his fourth rehab appearance with Triple-A Indianapolis. He pitched four innings and allowed one run. Brault has been on the injured list since April 1.

Pirates: RHP Wil Crowe (2-5, 5.89) will start on Friday, continuing the homestead with three games against Philadelphia. Crowe struck out a career-high nine in his last start.