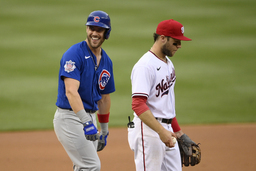 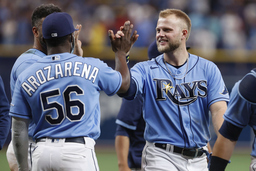 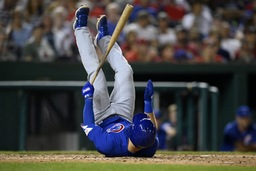 Chicago Cubs' David Bote rolls over after losing his balance while at-bat during the seventh inning of a baseball game against the Washington Nationals, Saturday, July 31, 2021, in Washington. (AP Photo/Nick Wass) 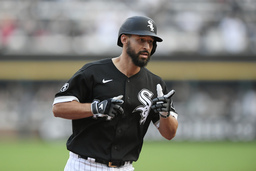 Chicago White Sox's Seby Zavala celebrates while rounding third after hitting a grand slam during the fourth inning of the team's baseball game against the Cleveland Indians on Saturday, July 31, 2021, in Chicago. (AP Photo/Paul Beaty)

There was something particularly poignant about the fact that the Washington Nationals hosted the Chicago Cubs this past weekend.

By the time their three-game series began Friday night, each team had pulled the plug on an era that produced some great memories for its fans. Washington traded Max Scherzer, Trea Turner and Daniel Hudson, three players who made key contributions when the Nationals won the World Series two years ago. The Cubs executed a similar teardown, parting with Kris Bryant, Anthony Rizzo and Javier Baez, who etched their names into Chicago lore when they helped the team end its 108-year title drought in 2016.

As difficult as this past week was for the fans in Washington and Chicago, they do still have those recent championships. That's more than teams like Detroit and Cleveland can say. Those two cities had extended periods in contention over the past decade but never quite won it all.

Chicago and Washington easily could have been in that group - the Cubs had to erase a 3-1 deficit in the World Series the year they won, and the Nationals had to rally just to make it through the wild-card game in `19. The line between glory and frustration is that thin, and as the playoffs have slowly expanded, even great teams can't be sure that they'll win a title before the window shuts.

Now it's the White Sox and Padres who are the aggressors - exciting teams on the rise making big moves at the deadline. But as bright as their futures look, nothing is guaranteed. The Yankees, after all, are still trying to reach their first World Series with their Aaron Judge-led core.

The lead atop the AL East changed hands when the Tampa Bay Rays swept a three-game series against Boston. That came immediately after the Rays routed the Yankees 14-0. Tampa Bay is 11-5 since the All-Star break and leads the Red Sox by 1 1/2 games.

When is the last time neither the Nationals nor the Cubs were in the postseason?

COMEBACK OF THE WEEK

With one out in the top of the ninth Tuesday night, the Detroit Tigers had a win probability of 0.5%, according to Baseball Savant. They were down 5-1 to Minnesota with nobody on, but after a single, a double and a walk, Eric Haase connected for a tying grand slam, and Detroit went on to win 6-5 in 11 innings.

The Twins nearly returned the favor the following day after falling behind 10-0 in the fourth. Detroit led 13-12 after eight, but a four-run ninth gave the Tigers some breathing room, and they won by a 17-14 score more fit for the Lions and Vikings.

Detroit's whole season has been a nice comeback story. The Tigers started the year 9-24, but they have a winning record since then, and at 51-57, Detroit is only three games behind second place in the AL Central. The worst of the Tigers' rebuild may be behind them.

Monte Harrison, an outfielder for Triple-A Jacksonville, misjudged a deep flyball slightly, and that led to a spectacular grab Saturday. Harrison went back and climbed the wall in left-center field, only to have the ball descend a few feet shallower than he seemed to expect. As he came back down from the top of the wall, he was able to reach with his glove hand and catch the ball anyway.

In 2013, the Nationals finished 10 games out of first place in the NL East, and the Cubs finished last in the NL Central.