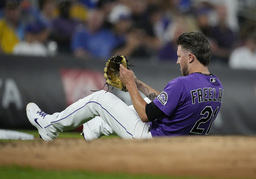 Colorado Rockies starting pitcher Kyle Freeland sits on the mound after being hit by a single off the bat of Chicago Cubs' Andrew Romine in the fifth inning of a baseball game Tuesday, Aug. 3, 2021, in Denver. (AP Photo/David Zalubowski) 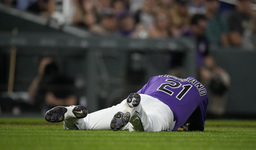 Colorado Rockies starting pitcher Kyle Freeland falls to the ground after being hit by a single off the bat of Chicago Cubs' Andrew Romine in the fifth inning of a baseball game Tuesday, Aug. 3, 2021, in Denver. Freeland remained on the mound through the inning but was pulled in the top of the sixth. (AP Photo/David Zalubowski) 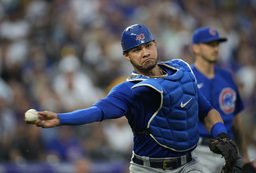 Chicago Cubs catcher Willson Contreras throws to first base to put out Colorado Rockies' Kyle Freeland after Freeland put down a sacrifice bunt in the second inning of a baseball game Tuesday, Aug. 3, 2021, in Denver. (AP Photo/David Zalubowski) 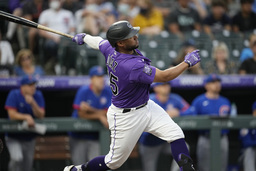 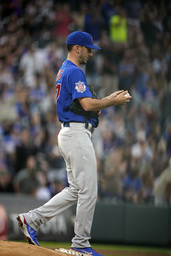 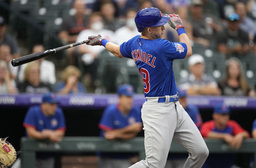 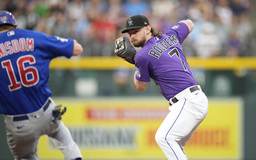 Colorado Rockies second baseman Brendan Rodgers, right, fields the throw to force out Chicago Cubs' Patrick Wisdom at second base on a ground ball hit by Ian Happ in the second inning of a baseball game Tuesday, Aug. 3, 2021, in Denver. (AP Photo/David Zalubowski) 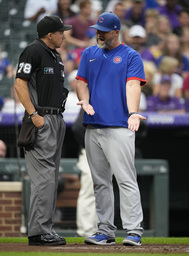 DENVER (AP) Elias Diaz hit a grand slam, Kyle Freeland got his first win in more than a month and the Colorado Rockies beat the Chicago Cubs 13-6 on Tuesday night.

Freeland (2-6) pitched five innings and earned his first win since June 28 before being removed with a left foot contusion. He was hit by a line drive with one out in the fifth, finished the inning and was replaced after throwing warmup pitches in the sixth. He allowed two runs on four hits and struck out five.

X-rays on the foot were negative.

''Immediately the pain struck in my foot,'' Freeland said. ''Pretty drastic at the time. When that kind of stuff happens, adrenaline takes over and you're kind of able to fight off that pain a little bit.

''Thankfully the x-rays came back negative on it, so that's really good news. That's a big bullet to dodge right there.''

''Hopefully the soreness subsides, and if there is some swelling, it subsides,'' Black said.

Sam Hilliard also homered and C.J. Cron had three hits and three RBIs for the Rockies.

Ian Happ homered for the Cubs, who played most of the game without manager David Ross, who was ejected in the second inning by home plate umpire Adam Hamari. Hamari had issued a warning to Ross when Patrick Wisdom was batting, and then Ross started yelling after a strike call on the first pitch to Happ.

Hamari tossed him and Ross came out to argue with Hamari before heading to the Cubs clubhouse.

''Maybe a little quick, but I think my voice carries a little bit more than I appreciate sometimes,'' Ross said of the ejection. ''I was upset about the call down to Wisdom, I thought it wasn't the best call I'd seen. I was probably a little louder than I needed to be early on and he didn't want to hear it. That was his right.''

The exchange briefly inspired Chicago, which scored its first run in the second. Diaz put Colorado ahead in the bottom of the second with his first career grand slam, the seventh by the Rockies this season.

''It's an amazing feeling,'' Diaz said. ''Rounding the bases there were a lot of emotions. I was just trying to find a good pitch and put a good swing on it.''

Happ hit a solo homer in the fourth, his 11th, but Hilliard's three-run shot in the Rockies' half of the inning, made it 7-2.

Hilliard has homered in back-to-back games for the fourth time in his career.

Chicago starter Zach Davies (6-8) allowed seven runs on six hits in four innings. The Cubs have lost six of their last seven -- three of their last four since the trade deadline.

''This is an exciting time for a lot of guys,'' Davies said. ''They're getting a lot playing time and they're proving what they're worth, that they're big-league talent.''

Colorado opened it up in the sixth off reliever Michael Rucker. Hilliard hit an RBI double, Raimel Tapia had an RBI single and Cron drove in two more with a bases-loaded single. Cron added an RBI single in the eighth.

Rockies: RHP Antonio Senzatela has rejoined the team, but has not been activated from the COVID-19 list. Senzatela had been away from the team since the All-Star break. He threw in a rehab game over the weekend and could be activated to start the series finale on Thursday.

When the Rockies weren't tagging Rucker's pitches in the sixth, he was tagging Colorado batters. He added to his own misery by hitting Yonathan Daza in the left elbow with a pitch, and four batters later he plunked Trevor Story in the rear to extend the inning.

Chicago RHP Alec Mills (4-4, 4.55) will make his first start and appearance against the Rockies on Wednesday. Colorado RHP Jon Gray (7-6, 3.62) is facing the Cubs for the third time in his career and first time since 2018.