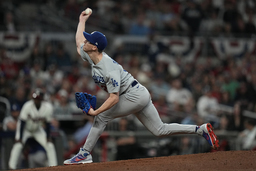 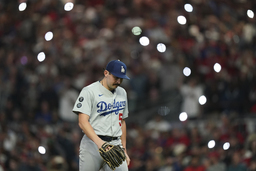 Los Angeles Dodgers pitcher Alex Vesia walks off the mound after being relieved in the sixth inning in Game 6 of baseball's National League Championship Series against the Atlanta Braves Saturday, Oct. 23, 2021, in Atlanta. (AP Photo/Brynn Anderson) 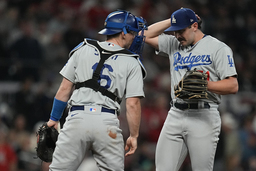 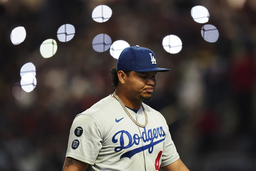 Los Angeles Dodgers pitcher Brusdar Graterol walks off the mound after being relieved in the sixth inning in Game 6 of baseball's National League Championship Series against the Atlanta Braves Saturday, Oct. 23, 2021, in Atlanta. (AP Photo/Brynn Anderson)

Certainly not with so many key expenditures stuck on the bench when it mattered most.

Max Scherzer watched helplessly from the dugout, unable to go in Game 6 as planned because of lingering fatigue in his powerful right arm. Clayton Kershaw, Max Muncy and Justin Turner were also spectators due to injuries, a combined 12 All-Star Games between them.

When elimination came for the 106-win Dodgers, it was especially painful. High expectations come with splashy spending. That included hope the roster had enough depth to overcome injuries that might've overwhelmed lesser teams.

''I've said it before, I know we have a high payroll, but that's what you get when you pay for players,'' second baseman Trea Turner said before Saturday's game. ''You get talent. You get a lot of depth.''

Scherzer, a candidate to win his fourth Cy Young Award, was expected to be the foundation of the postseason rotation. Instead, he started Game 2 of the NLCS on just two days' rest after a 13-pitch save in the clincher of the Division Series. His arm never recovered.

The wild-card Dodgers hoped Scherzer would be ready to start a Game 7 on Sunday. Instead, it's not clear where the free agent-to-be will make his next appearance.

The payroll, which topped $198 million, couldn't overcome repeated hits to the rotation. Trevor Bauer, Dustin May and Kershaw began the season in the rotation but didn't make it to the team's fifth NLCS in the last six years. May and Kershaw were injured, and Bauer has been on paid administrative leave since July 2 under MLB's joint domestic violence and sexual assault policy.

Instead, from the rotation which opened the season, only Walker Buehler and Julio Urias survived to the end. The patchwork rotation became an even greater liability when manager Dave Roberts used Scherzer and Urias in October relief roles.

When Roberts chose to use Scherzer in a closing role, he said he knew it came with a cost. The manager acknowledged before Saturday night's game he may have underestimated the price.

''Did I expect that after that 13-pitch save?'' Roberts asked of not having Scherzer for Game 6. ''No. And to say after an extra day, not to be able to make the start today, no, I didn't, and I don't think Max did either. But that's where we're at. I know Max wants to take the baseball, but his arm is not allowing it.''

The disappointing end is hardly unfamiliar. The Dodgers experienced seven straight October failures - including consecutive defeats in the 2017 and '18 World Series - before finally earning a championship last year.

When they finally broke through, the 2020 Dodgers felt cheated by the pandemic. No buzzing sellouts at Dodger Stadium, no parade, hardly any of the pomp that usually accompanies such a feat. It became a source of motivation that - along with a heaping load of talent - was supposed to push them back up the mountain this year.

''In some ways, we feel like we kind of half-won the thing,'' Buehler said this spring of the 2020 title.

The Dodgers were hoping to celebrate again, this time with their fans. They showed sufficient resiliency to survive Thursday's Game 5 elimination game, hitting five homers in an 11-2 win, including three by Chris Taylor.

With Buehler pitching on three days of rest for the second time in the postseason, the NLCS comeback ended. Buehler gave up four runs in four innings, leaving his ERA for the series at 7.04.

Roberts said Saturday that Scherzer and Buehler ''are both aces.'' With one top starter forced to pitch on short rest and the other ace sidelined with a dead arm, the aces were in no position to save the Dodgers' season.