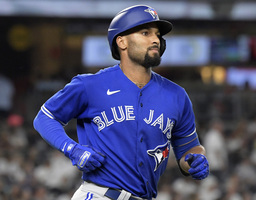 Toronto Blue Jays' Marcus Semien runs the bases on a home run against the New York Yankees during the fifth inning of a baseball game Tuesday, Sept. 7, 2021, at Yankee Stadium in New York. The Texas Rangers have reached an agreement on a seven-year contract with Gold Glove second baseman and potential shortstop Marcus Semien, according to a source familiar with the deal. That person spoke to The Associated Press on condition of anonymity Sunday night, Nov. 28, 2021 because the deal was not finalized. ESPN, which first reported the agreement, said it was worth $175 million. (AP Photo/Bill Kostroun, File)

Texas and Semien came to terms Wednesday, hours before the expiration of MLB's five-year collective bargaining agreement with the Major League Baseball Players Association, which is expected to lead to a lockout.

''Marcus' reputation around the game is impeccable. He's a leader in every clubhouse he steps into, respected for the way he goes about his work and how he treats others,'' said Jon Daniels, the Rangers president of baseball operations. ''There are few players in the game who garner the level of respect that he does from teammates and opponents alike. We're thrilled to add a player of his caliber to the organization.''

Semien was a shortstop in his six seasons with Oakland from 2015-20 before starting 147 games at second base and playing all 162 games for Toronto this year. He signed an $18 million, one-year deal with the Blue Jays in free agency last offseason.