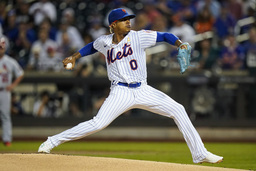 New York Mets' Marcus Stroman pitches during the first inning of the team's baseball game against the St. Louis Cardinals on Sept. 14, 2021, in New York. The Chicago Cubs landed one of the top remaining free agent starters, agreeing to a deal with Stroman on Wednesday, Dec. 1. Stroman announced he's heading to Chicago in a series of tweets a few hours before the Collective Bargaining Agreement between the players and owners was set to expire. (AP Photo/Frank Franklin II, File)

Stroman announced he was leaving the New York Mets for Chicago in a series of tweets a few hours before the labor contract between players and owners was set to expire. The Cubs later confirmed the deal.

Stroman cited the ''culture and passion everywhere'' in the city and said he's ''beyond excited to pitch in front one of the best fan bases in all of sports.''

He's also looking forward to playing at Wrigley Field, saying it's ''the only big league stadium I haven't pitched at in my career. Crazy. Can't wait to call it home!''

Improving the Cubs' pitching was a priority for president of baseball operations Jed Hoyer after the team ranked among the worst in baseball with a 4.87 ERA. The 30-year-old Stroman figures to give the rotation a huge boost. He went 10-13 with a 3.02 ERA and tied for the major league lead with 33 starts for the Mets this year.

Stroman was an All-Star with Toronto in 2019 before getting traded to New York that season, then sat out the 2020 season because of the COVID-19 pandemic. He is 61-60 with a 3.63 ERA over seven seasons with the Blue Jays and Mets.

Stroman figures to anchor the Cubs' rotation along with Kyle Hendricks and newcomer Wade Miley. Alec Mills, Adbert Alzolay, Justin Steele and Keegan Thompson are also in the mix for starting spots.

The Cubs are retooling after going 71-91 this year, their first losing record since 2014. They claimed Miley off waivers from Cincinnati on Nov. 7.

Chairman Tom Ricketts said in an October letter to fans that the Cubs would ''be active in free agency and continue to make thoughtful decisions to bolster our team this offseason.''

Gomes agreed to a $13 million, two-year contract that includes a club option for 2024.

The Cubs also have Willson Contreras behind the plate, but he is eligible for free agency after next season and the team could decide to trade him if the sides can't reach a long-term deal this winter. Chicago also could use Gomes to provide more rest for Contreras, who turns 30 in May.

Frazier agreed to a one-year contract after batting .186 with the Yankees last season. The No. 5 overall pick in the 2013 amateur draft, he hit .239 in five seasons for New York.