Not worth 1,000 words: Player images scrubbed from MLB site 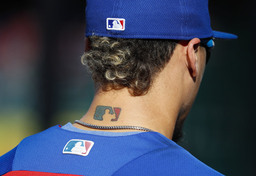 Those looking for a photo of Mike Trout or highlights of Atlanta's Game 6 win over Houston in the World Series won't find them on Major League Baseball's official website.

Shortly after the sport's first work stoppage in 26 years began Thursday at 12:01 a.m., MLB removed all current player photos and highlights off MLB.com. Major League Baseball said in an email to The Associated Press that ''every action we are taking is at the advice of legal counsel per the National Labor Relations Act.''

By removing players names, images or likenesses, owners hope to avoid running afoul of federal labor laws or the insinuation that any uses would be for commercial or promotional purposes to make money during a labor dispute.

Player photos have been replaced with generic silhouettes, while the headline queues have been filled with features about retired players or historic videos.

The scrubbing goes beyond that. The Los Angeles Angels announced their promotional schedule last month, including a bobblehead commemorating Shohei Ohtani's AL MVP season on April 8. The schedule now lists only a ''historic season bobblehead'' on that date.

On MLB Network, experts focused Thursday on the upcoming reveal of the Era Committees' Hall of Fame selections, with clips of long-retired stars Gil Hodges and Tony Oliva but no highlights from any 2021 games.

In Philadelphia, a banner celebrating Bryce Harper winning the NL MVP was taken down at Citizens Bank Ballpark.

Union head Tony Clark and Bruce Meyer, the players' chief lawyer, said that MLB scrubbed images on their own, and that they had no input.

Players, like New York Mets pitcher Taijuan Walker, have taken things one step further and removed images from their own Twitter profiles.

Jeff Katz, the chief product and strategy officer for FanAI, said leagues do not have an offseason when it comes to promotion, especially in the age of social media. FanAI tracks how fans are watching sports and consumer spending.

''It will be difficult for MLB to do sponsored posts because they can't share video clips or highlights. The impact on them is likely to be worse than other leagues because the NBA and others that have embraced social media have a healthy amount of content shared outside the league,'' Katz said.

The challenges are even greater considering some fans still have not been back to ballparks for the two seasons since the COVID-19 pandemic started. Marketing data has also become more measured and can quickly assess the marketplace.

''If they can wrap up in a timely fashion and not have too much pie in their face, they can brush off. If it becomes a stand still for months and starting the season on time is in jeopardy, not many businesses are going to put up with it,'' Katz said. ''The sponsorship business is at a crossroads. With digital coming so far over last 5-10 years and tracking results, more brands are going to demand to see results of investments, especially if they perceive extracting value is in jeopardy. They are not going to sit on the sidelines for long. They will insist on results.''