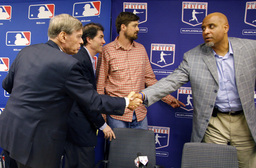 Major League Baseball Commissioner Bud Selig, left, shake hands with MLB Players Association Director of Players Relations Tony Clark, as MLBPA Executive Director Michael Weiner, second from left and Boston Red Sox's Andrew Miller, second from right, leaves after a press conference announcing a five-year collective bargaining agreement on Nov. 22, 2011. Getting a side to give back something it gained previously in collective bargaining can lead to difficult negotiations, which is why Major League Baseball has its first work stoppage in 26 years. (AP Photo/Bebeto Matthews, File) 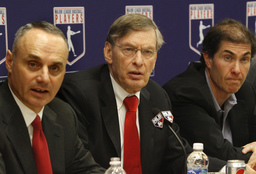 Major League Baseball commissioner Bud Selig, center, is flanked by Vice President of Labor Relations Rob Manfred, left, and MLB Players Association Executive Director Michael Weiner, during a new conference announcing a five-year collective bargaining agreement on Nov. 22, 2011 in New York. Getting a side to give back something it gained previously in collective bargaining can lead to difficult negotiations, which is why Major League Baseball has its first work stoppage in 26 years. (AP Photo/Bebeto Matthews, File) 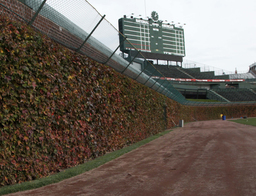 This Oct. 25, 2011, file photo, shows the outfield ivy and iconic manual scoreboard at Wrigley Field in Chicago. Getting a side to give back something it gained previously in collective bargaining can lead to difficult negotiations, which is why Major League Baseball has its first work stoppage in 26 years. (AP Photo/Charles Rex Arbogast, File)

NEW YORK (AP) When baseball players agreed a decade ago to restraints on signing bonuses for draft picks, then-union head Michael Weiner said: ''If it doesn't work, we can always try something else.''

Getting a side to give back something it gained previously in collective bargaining can lead to difficult negotiations, which is why Major League Baseball has its first work stoppage in 26 years.

Free agency has been the central issue in baseball collective bargaining for a half-century, joined by the luxury taxes, salary arbitration and cost controls on amateur spending.

Agreed to in collective bargaining in 1976 following the decision by arbitrator Peter Seitz, who ruled in the Andy Messersmith/Dave McNally grievance that the reserve clause in the Uniform Player Contract meant a club could renew a player for just one season, not in perpetuity as management had long claimed.

Since the 1976 agreement, free-agent eligibility has been set at six seasons of major league service.

Players lost a grievance over the timing of the Chicago Cubs' decision to bring up Kris Bryant in April 2015.

''Fans want to come to the ballpark and see their team competing and playing well,'' union head Tony Clark said. ''Fans like to see a higher level of integrity in the system, such that the types of manipulations that we've seen don't continue to manifest themselves.''

MLB would keep the existing provision or change eligibility to age 29.5 rather than six years, which it has been since 1976.

''We already have teams in smaller markets that struggle to compete,'' baseball Commissioner Rob Manfred said. ''Shortening the period of time that they control players makes it even harder for them to compete. It's also bad for fans in those markets. The most negative reaction we have is when a player leaves via free agency. We don't see that, making it earlier, available earlier, we don't see that as a positive.''

Compensation for losing free agents led to a 50-day midseason strike in 1981 that caused the cancellation of 713 games. The current system requiring draft-pick compensation for free agents who turned down qualifying offers has been in place since 2012. MLB has offered to eliminate compensation.

First agreed to following the 232-day strike in 1994-95, the so-called competitive balance tax was an alternative to MLB's proposed salary-cap system. The initial system that started in 1997 assessed a tax on 35% of the amount above $51 million for the five teams with the highest payrolls exceeding the threshold.

Began in 1974, when players with two or more seasons of major league service were eligible. In the settlement of a two-day strike in 1985, the sides raised eligibility to three seasons starting in 1987, the first significant giveback by players during bargaining. As part of an agreement that followed a 32-day lockout in 1990, eligibility was restored to the top 17% of players by service time, with at least two years of service but fewer than three. That was raised to 22% in 2013.

Players agreed to signing bonus pool limits for the amateur draft starting in 2012, with financial penalties for exceeding a signing bonus pool and draft pick loss for teams exceeding by more than 5%. Since then, no team has exceeded by more than 5%. While the union has opposed management proposals for a draft of international prospects, it agreed to a hard cap on international signings starting in 2017.

Scott Boras, the most influential agent, claims capping signing bonuses for draft picks caused an erosion in the season's integrity.

''It created an incentive for the race to the bottom,'' he said, ''because now we have half the major league teams at some time during the season being noncompetitive, trading off their players, making the game and the season very different than what it was intended to be, and that was having an incentive to win every game that you play.''

With greater ability to predict the costs for acquiring amateur talent, a higher percentage of teams went into rebuilding mode at the same time, which management says is a reasonable strategy and which the union calls ''tanking.''

''We see major problems,'' said Mets pitcher Max Scherzer, a member of the union's eight-man executive committee. ''First and foremost, we see a competition problem and how teams are behaving because of certain rules.''