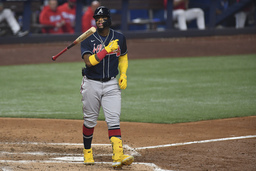 Atlanta Braves' Ronald Acuna Jr. tosses his bat after he walked during the fifth inning of the team's baseball game against the Miami Marlins, Saturday May 21, 2022, in Miami. (AP Photo/Gaston De Cardenas) 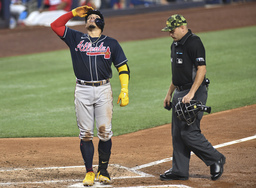 Atlanta Braves William Contreras crosses home plate after hitting a solo home run during the fifth inning against the Miami Marlins in a baseball game Saturday May 21, 2022, in Miami. (AP Photo/Gaston De Cardenas) 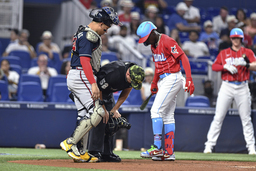 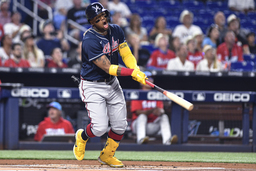 Atlanta Braves' Ronald Acuna Jr. reacts after popping out during the first inning of the team's baseball game against the Miami Marlins, Saturday, May 21, 2022, in Miami. (AP Photo/Gaston De Cardenas) 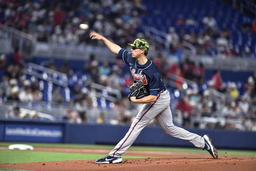 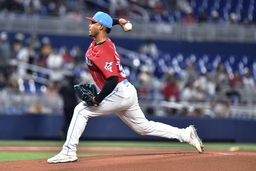 Acuna singled, walked twice, stole a base and scored a run. His string began last summer and was interrupted when the star outfielder injured his knee in Miami on July 10, ending his year.

The Braves led 4-2 when closer Kenley Jansen struck out the first two batters in the ninth. Pinch-hitter Jacob Stallings then walked, Jazz Chisholm Jr. had an infield single and Garrett Cooper hit an RBI double.

Jansen struck out Jorge Soler, the MVP of the World Series for Atlanta last year, to get his 10th save and 360th of his career.

''When you've got 350-360 saves, I'm sure not all of them are pretty, not all of them are real clean'' Braves manager Brian Snitker said. ''In order to get that many you better be able to weather the storm like he does. He's got another gear, too, when he gets in trouble.''

''I was really eager to get down and battle,'' Wright said. ''I think after the first inning, I was able to settle down a bit. From that point on, I was able to mix my pitches.''

Contreras' home run in the fifth put Atlanta ahead 1-0. He drove a fastball from Elieser Hernandez (2-4) over the wall in right-center for his fifth homer.

Contreras went deep again in the seventh against reliever Cody Poteet with an opposite-field shot to right. It was Contreras' second multi-homer game this season and ended Poteet's scoreless innings string at 16 1/3.

''I was looking for my pitch to hit, and I was very relaxed at the plate,'' Contreras said through a translator.

Marcell Ozuna and Adam Duvall hit RBI singles in the sixth for Atlanta.

Chisholm limped noticeably after getting spiked in the left leg on Ozzie Albies' unsuccessful steal attempt of second in the eighth. Chisholm hustled to beat out the grounder to reach in the ninth.

''Got hit with a spike on that slide,'' Marlins manager Don Mattingly said. ''Where that goes, I'm not sure.''

Soler had an RBI double off Atlanta reliever Darren O'Day in the sixth.

Brian Anderson added an RBI grounder off A.J. Minter in the eighth that got Miami within 4-2.

The Marlins were 1 for 9 with runners in scoring position after a 1-for-11 performance Friday. Their homer streak also ended at 13 games, one shy of the club record in 2008.

Hernandez allowed one run and three hits in five innings, walking one and striking out five.

The Braves completed a rare double play that not only thwarted a Marlins scoring opportunity but ended the fourth inning. Jesus Sanchez hit a one-out triple. With a drawn-in infield, Bryan De La Cruz followed with a hard grounder to shortstop Dansby Swanson, who caught Sanchez in a rundown between third and home. Third baseman Austin Riley eventually tagged Sanchez and then found De La Cruz drifting from first. Miami's second rundown of the play ended in another out as second baseman Ozzie Albies tagged De La Cruz.