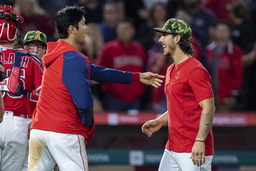 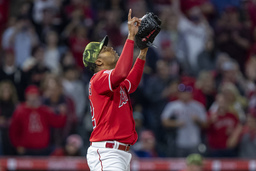 Los Angeles Angels relief pitcher Raisel Iglesias points to the sky, after the Angels defeated the Oakland Athletics 5-3 in a baseball game in Anaheim, Calif., Saturday, May 21, 2022. (AP Photo/Alex Gallardo) 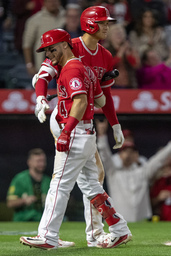 Los Angeles Angels' Andrew Velazquez, left, gets congratulations from Shohei Ohtani after Velazquez hit a two-run home run against the Oakland Athletics during the seventh inning of a baseball game in Anaheim, Calif., Saturday, May 21, 2022. (AP Photo/Alex Gallardo) 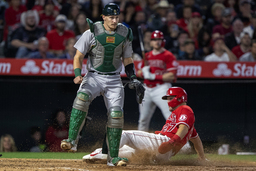 Los Angeles Angels' Mike Trout scores without a throw to Oakland Athletics catcher Sean Murphy, left, on an infield hit by Luis Rengifo during the sixth inning of a baseball game in Anaheim, Calif., Saturday, May 21, 2022. (AP Photo/Alex Gallardo) 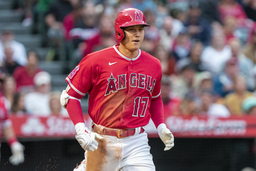 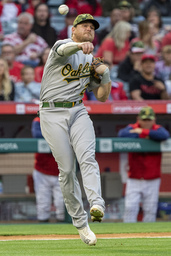 Oakland Athletics third baseman Sheldon Neuse throws to first get out Los Angeles Angels' Andrew Velazquez on a bunt-attempt during the first inning of a baseball game in Anaheim, Calif., Friday, May 20, 2022. (AP Photo/Alex Gallardo) 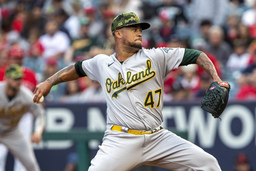 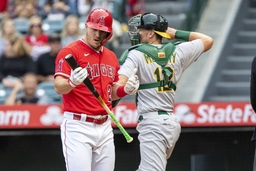 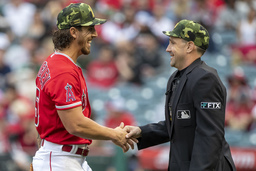 Los Angeles Angels starting pitcher Michael Lorenzen, left, smiles as he meets with home plate umpire David Rackley, who was checking the pitcher for foreign substances during the first inning of the team's baseball game against the Oakland Athletics in Anaheim, Calif., Saturday, May 21, 2022. (AP Photo/Alex Gallardo) 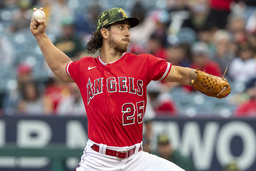 ''It was a tough little stretch,'' Trout said after the Angels' 5-3 victory over the Oakland Athletics. ''We were in a majority of the games and just missed out. It's good to have a bounce back when we had some guys step up.''

Luis Rengifo and Andrew Velazquez homered to back Michael Lorenzen, who threw six innings of three-hit ball for his fifth win.

Trout scored on Rengifo's bases-loaded infield single in the sixth to extend the Angels' lead to 3-0. The three-time AL MVP joined Willie Mays and Alex Rodriguez as the only players with at least 1,000 runs, 300 homers and 200 stolen bases by their age-30 season.

''To be able to be in that group especially, to do it this long and to accomplish that is pretty cool,'' Trout said.

Trout is also the second player in team history to score 1,000 runs. Garrett Anderson holds the franchise record with 1,024.

''It's quite an achievement. It means he's had some pretty good guys that have driven him in, but he's also been setting the table,'' Angels manager Joe Maddon said. ''It's just another milestone in his career that's going to continue with good health. I hope people won't downplay it, because that's really significant.''

Rengifo hit a go-ahead homer off Adam Kolarek (0-1) in the fifth inning and Velazquez added a two-run shot in the seventh for the Angels, who have won four of six against the A's this season.

Oakland starting pitcher Frankie Montas and outfielder Ramon Laureano each injured their right hand in the second inning. Sheldon Neuse had two hits and drove in a run.

The A's rallied with three runs in the eighth but couldn't get anything going in the ninth as Raisel Iglesias retired the side for his ninth save.

Lorenzen (5-2) continues to pitch well primarily as a starter for the first time since 2015. He struck out five and walked two to win for the fourth time in his last five starts.

Oakland had runners at the corners with two outs in the third before Lorenzen struck out Jed Lowrie. In the fourth, the A's had runners on first and second before Luis Barrera and Cristian Pache went down swinging to end the threat.

''The four-seam felt pretty good today, so I felt confident in it. I found my changeup later, so it got better and better as the game went on,'' Lorenzen said.

Rengifo hit his first homer of the season in the fifth, when he drove Kolarek's fastball into the Angels' bullpen in left field. Oakland pitchers had retired 13 straight and held the Angels to one hit before Rengifo broke through.

Los Angeles extended its lead to three when Brandon Marsh drew a bases-loaded walk and Trout scored on an infield single. Velazquez made it 5-0 in the seventh when he connected on Jacob Lemoine's sinker and put it over the wall in left-center.

Oakland finally got on the scoreboard in the eighth. Neuse had an RBI single and scored on Lowrie's double down the left-field line. Lowrie came home on a wild pitch by Oliver Ortega.

''We did have some opportunities there early. We just weren't able to cash it,'' manager Mark Kotsay said.

Laureano was hit in the right hand by a 93 mph sinker from Lorenzen. Laureano remained in the game before being lifted for Chad Pinder in the bottom of the third.

Montas was struck by Rengifo's line drive up the middle. Montas put up his right hand to shield his face, and the ball glanced off his hand and glove. He was able to field the ball and throw underhand to first baseman Seth Brown for the out, but left the game after throwing two warmup pitches.

Kotsay said X-rays on both players were negative and they are day-to-day.

Athletics: SS Elvis Andrus got the night off before a day game Sunday.

Angels: RF Taylor Ward (stinger) was not in the lineup after hitting the wall hard when he made a catch during the ninth inning Friday. ... C Kurt Suzuki (COVID-19) was reinstated from the injured list and C Austin Romine was returned to Triple-A Salt Lake.

Athletics: LHP Cole Irvin (2-1, 2.93 ERA) is slated to come off the injured list before making his sixth start of the season.

Angels: LHP Patrick Sandoval (2-1, 1.91 ERA) makes his second straight start against the A's. He got the win Sunday at Oakland after allowing one run on four hits in 6 1/3 innings.