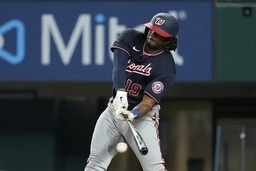 Washington Nationals' Josh Bell connects for a run-scoring single in the eighth inning of a baseball game against the Texas Rangers, Friday, June 24, 2022, in Arlington, Texas. Juan Soto scored on the hit. (AP Photo/Tony Gutierrez) Washington Nationals' Josh Bell looks to the dugout as he stands on second after hitting a double in the sixth inning of a baseball game against the Texas Rangers, Friday, June 24, 2022, in Arlington, Texas. (AP Photo/Tony Gutierrez) 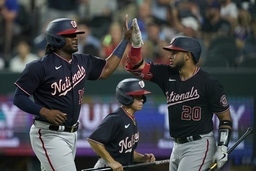 Texas Rangers shortstop Corey Seager reaches out to field a ground out by Washington Nationals' Victor Robles in the fifth inning of a baseball game, Friday, June 24, 2022, in Arlington, Texas. (AP Photo/Tony Gutierrez) 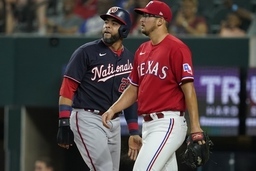 Washington Nationals' Nelson Cruz, left, walks past Texas Rangers starting pitcher Dane Dunning, right, on his way to the dugout after being thrown out at home while trying to score on a Keibert Ruiz single in the fourth inning of a baseball game, Friday, June 24, 2022, in Arlington, Texas. (AP Photo/Tony Gutierrez) ARLINGTON, Texas (AP) Josh Bell was already feeling good at the plate, and it felt really nice to keep hitting in his return home to Texas.

Bell hit a go-ahead RBI single in the eighth inning, and also had a triple and double while scoring Washington's only other run, as the Nationals won 2-1 on Friday night in their first interleague game at Texas in 17 years.

''That was cool. It was cool just knowing that I had some friends and family here,'' said Bell, the big first baseman who is from nearby Irving, Texas. ''Friends that played baseball with me growing up, being able to do this in front of them makes it all that more special,''

As a high school player, Bell hit a home run in the Rangers' former stadium across the street, where he also played with the Pittsburgh Pirates in 2019. A long ball was all that was missing to keep him from a cycle with the Nationals.

Bell had a two-out triple in the first that ricocheted hard after hitting near the top of the right field wall. He scored the game's first run in the sixth, when he had a one-out double before Luis Garcia's ground-rule double that bounced into the Texas bullpen in right-center field.

''He had a great night. He's been consistent for us all year long, he's playing well,'' Nationals manager Dave Martinez said. ''Love him. He goes out there every day, you know what you're going to get from him. He's a professional. Right now, he's having some big hits for him.''

Juan Soto led off the Nats eighth with a double off just-in reliever Dennis Santana (3-3) before Bell followed with his hit that was the difference. Bell, who estimated 30-40 friends and family being there with more expected over the weekend, is 11 for 27 (.407) his last eight games to raise his season average 12 points to .302.

''Right now, I feel really good. I was able to kind of expand the zone a little bit and hit a ground ball up the middle,'' Bell said. ''I'm definitely happy to be locked in.''

The only other time the Nationals had played at Texas was in June 2005, when Bell was a couple of months shy of his 13th birthday.

That is the longest gap any opponent has gone between games at the Rangers, according to Elias Sports Bureau. But there have been nine longer such spans of teams visiting others since interleague play began in 1997.

Adolis Garcia homered and had his sixth outfield assist of the season for the Rangers, who had won their previous six interleague games before leaving 10 runners on base.

''We had a chance to win the game,'' Rangers manager Chris Woodward said. ''Tied after six. I'll take our bullpen over theirs and our hitters over theirs honestly. So that's a missed opportunity to me. When you got to tie game with three innings left, we've got to find a way to win that game.''

Carl Edwards (1-1) worked 1 2/3 scoreless innings for the victory. Hard-throwing Tanner Rainey worked the ninth for his ninth save in 12 chances, even after he walked a batter and then gave up a single to Brad Miller, the utility player in his 1,000th big league game.

Garcia led off the sixth with his 14th homer, a 423-foot drive that made it 1-1. His outfield assist came on a no-hop throw from right-center to catcher Jonah Heim that easily beat Nelson Cruz to the plate by several feet in the fourth.

Cruz, a week before his 42nd birthday, had led off that inning with a double in his return to Texas, where he was twice an All-Star and was the 2011 AL Championship Series MVP while playing there from 2006-13.

Rangers right-hander Dane Dunning, who has gone without a win in his last 10 starts since the end of April, struck out four, walked one and allowed a run over six innings. Washington righty Paolo Espino, in his third time through the starting rotation after 20 relief appearances, also allowed one run in his 5 1/3 innings.

Nationals: GM Mike Rizzo told MLB.com that there's no rush to put a plan together for RHP Stephen Strasburg. ''He can't do anything until he's pain free and feeling good. He's not there yet,'' Rizzo said. Strasburg had surgery last summer for thoracic outlet syndrome. The 2019 World Series MVP was diagnosed with a stress reaction of the ribs after his only start this season, at Miami on June 9, when he allowed seven runs in 4 2/3 innings.

Nats right-hander Josiah Gray (6-4, 3.95 ERA) has allowed only one earned run over 17 innings in his three June starts. Texas is going with a bullpen day, though Taylor Hearn (4-5, 6.25) could be part of that after being pulled from his rotation spot. The lefty allowed 17 runs in 18 2/3 innings in his four June starts.