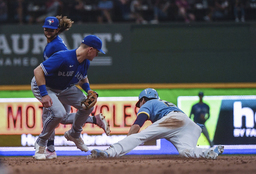 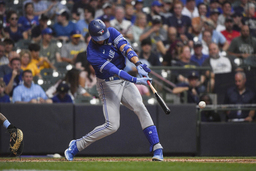 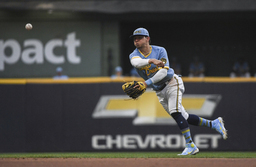 Milwaukee Brewers' Luis Urias makes a throw to first to attempt to get out Toronto Blue Jays' Alejandro Kirk, who was safe during the third inning of a baseball game Friday, June 24, 2022, in Milwaukee. (AP Photo/Kenny Yoo) 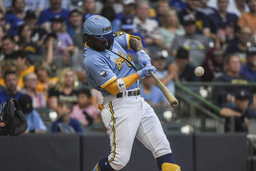 Milwaukee Brewers' Andrew McCutchen hits a single during the second inning of the team's baseball game against the Toronto Blue Jays on Friday, June 24, 2022, in Milwaukee. (AP Photo/Kenny Yoo) 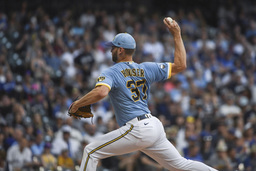 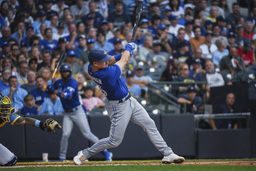 Toronto Blue Jays' Matt Chapman follows through on a three-run double during the second inning of the team's baseball game against the Milwaukee Brewers on Friday, June 24, 2022, in Milwaukee. (AP Photo/Kenny Yoo) 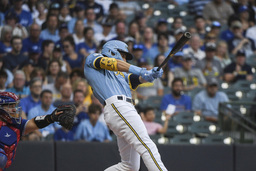 Milwaukee Brewers' Christian Yelich hits a single during the first inning of the team's baseball game against the Toronto Blue Jays on Friday, June 24, 2022, in Milwaukee. (AP Photo/Kenny Yoo)

MILWAUKEE (AP) Alejandro Kirk didn't even need to play a full game to continue cementing his status as one of baseball's best hitting catchers.

Kirk went 4 for 4 and homered for the third straight game before leaving with a bruised left hand in the seventh inning of the Toronto Blue Jays' 9-4 victory over the Milwaukee Brewers on Friday night.

He appeared to get hit in the hand on a backswing from Jonathan Davis in the seventh. The 23-year-old Kirk remained in the game for the rest of that at-bat before leaving at the same time the Blue Jays made a pitching change. He underwent precautionary X-rays that came back negative.

''I can flex it,'' Kirk said through an interpreter. ''It's a little sore, a little uncomfortable right now, but hopefully tomorrow it feels a little better.''

Kirk's big night represented the latest chapter in his breakthrough season. He is hitting .321 with nine homers, 28 RBIs, a .406 on-base percentage and .913 OPS.

''How do you pitch to him?'' Blue Jays manager Charlie Montoyo said. ''He can hit the ball inside. He doesn't chase bad pitches. He's always ahead in the count and he can go the other way. He's doing what it takes to be one of the best hitters in baseball.''

Kirk led an all-around quality performance by the Blue Jays.

Manoah struck out six and allowed five hits, three walks and two runs to bounce back after giving up a season-high four runs in a 4-0 loss to the New York Yankees on Saturday. He threw a season-high 106 pitches.

''I feel great,'' Manoah said. ''Probably could have gone a little longer if I didn't walk some of those guys, but we'll continue to get better and work on the next one.''

Manoah has pitched so well this season that Friday's performance actually caused his ERA to rise to 2.05. The Blue Jays are 26-8 in Manoah's 34 career starts.

Toronto grabbed an early 5-0 lead by opening the second inning with six straight hits against Adrian Houser (4-8). Chapman knocked home three runs with a bases-clearing double down the left-field line and scored when Lourdes Gurriel Jr. ripped a double to right.

''He missed some balls in the middle of the plate, and they hit them hard,'' Brewers manager Craig Counsell said.

The Blue Jays extended their lead to 8-1 by scoring three in the seventh off Trevor Kelley, who allowed Biggio's solo shot and Kirk's two-run blast.

Vladimir Guerrero Jr. added an RBI double off Peter Strzelecki in the ninth. The Brewers scored twice in the bottom half.

Friday marked the first time Montoyo had ever set foot in Milwaukee's ballpark, even though the Brewers drafted him twice - in the 26th round in 1986 and the sixth round in 1987.

Montoyo made it as far as the Brewers' Triple-A affiliate before getting traded to the Montreal Expos in 1993.

Blue Jays hitting coach Guillermo Martinez began serving a five-game suspension. He was punished by Major League Baseball for making contact with umpire Doug Eddings during the exchange of lineup cards before the Blue Jays' 9-5 victory over the Chicago White Sox on Wednesday.

Blue Jays: RHP Yimi Garcia went on the 15-day injured list with a left back strain. RHP Jeremy Beasley was recalled from Triple-A Buffalo. ... OF George Springer was out of the lineup for a second straight game with an elbow issue. . RHP Nate Pearson, who still hasn't pitched for Toronto this season, is dealing with a lat strain.

Brewers: RHP Brandon Woodruff has worked through two rehabilitation assignments well enough that his next start will be in the big leagues. Manager Craig Counsell didn't specify which day Woodruff would return, but Woodruff says he anticipates pitching sometime during the two-game series at Tampa Bay that begins Tuesday. Woodruff went on the IL with an ankle injury but has since been dealing with Raynaud's syndrome, which causes decreased blood flow to the fingers. ''As far as pitching and throwing, the feeling in the middle finger has gotten to the point where it's become minimal and it's not affecting me,'' Woodruff said. ''I'm not going out there and I can't feel my middle finger. So, that's the important part.'' . OF Hunter Renfroe missed a second straight game with a calf injury. ... INF Mike Brosseau (right ankle sprain) was reinstated from the injured list.