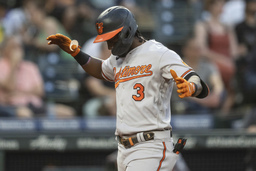 Baltimore Orioles' Jorge Mateo celebrates after hitting a solo home run during the sixth inning of a baseball game against the Seattle Mariners, Monday, June 27, 2022, in Seattle. The Orioles won 9-3. (AP Photo/Stephen Brashear) 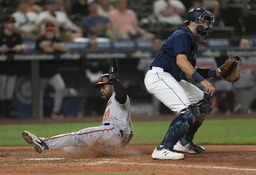 Baltimore Orioles' Cedric Mullins scores a run on a sacrifice fly by Anthony Santander while Seattle Mariners catcher waits for a throw during the ninth inning of a baseball game, Monday, June 27, 2022, in Seattle. (AP Photo/Stephen Brashear) 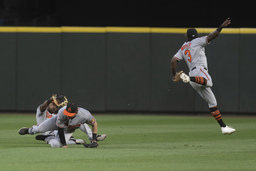 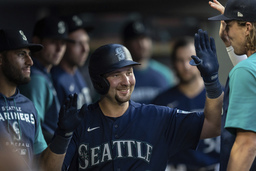 Seattle Mariners' Cal Raleigh is congratulated by teammates in the dugout after hitting a solo home run during the fifth inning of a baseball game against the Baltimore Orioles, Monday, June 27, 2022, in Seattle. (AP Photo/Stephen Brashear) 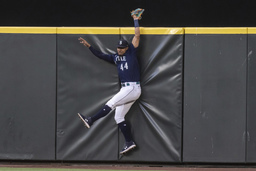 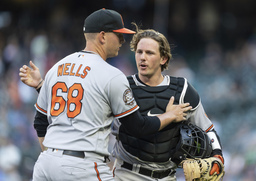 Baltimore Orioles starting pitcher (68) is congratulated by catcher Adley Rutschman after the second inning of a baseball game against the Seattle Mariners, Monday, June 27, 2022, in Seattle. (AP Photo/Stephen Brashear)

Wells (6-4) was perfect until allowing Cal Raleigh's homer with two outs in the fifth inning. He retired the next batter before handing off to the bullpen, finishing with three strikeouts on 63 pitches.

Joey Krehbiel and Keegan Akin combined to close out Baltimore's gem. Akin got his first save with 3 1/3 scoreless innings.

''Just the ability to hit spots, just trying to attack the zone, it kind of worked out for me'' Wells said. ''It felt like I had a good fastball tonight, it's the best that it's felt in a while.''

Rutschman, a touted rookie from Sherwood, Oregon, who starred at Oregon State, had an RBI single in the first inning that skipped off second baseman Adam Frazier's glove. Baltimore added another run in the second on an RBI double from center fielder Cedric Mullins.

Rutschman and Ryan Mountcastle hit back-to-back homers in the third inning for a 4-0 lead, and Anthony Santander and Austin Hays clubbed consecutive drives in the fourth for a 7-0 advantage. Jorge Mateo added a solo shot in the sixth.

''We've got a lot of confidence right now,'' Baltimore manager Brandon Hyde said. ''Our dugout is as good as I've seen it since I've been here. It's just super positive, guys are really pulling for each other, and there's a lot of energy in there right now.''

Rutschman's home run was special, as it came with his family in the stands for his first career big league game at T-Mobile Park. Rutschman's family made the three-hour drive from his hometown and cheered loudly from their seats behind the visitors' dugout when Rutschman homered.

It was the first time Rutschman's grandfather, Ad, had seen him play in person as a major leaguer.

''It's just so special,'' Rutschman said. ''Home run or not, just having him in the stands again, is just so extremely important and special for me and my family. Having him be a person I look up to so much, it just means the world to me.''

''We haven't had that game in quite some time,'' Seattle manager Scott Servais said. ''Our starting pitching has been really the anchor for us over the last month or so. The guys have been so darn consistent.''

The Mariners scored their second run in the sixth on a double off the left-field wall from Eugenio Suarez that scored Julio Rodriguez.

Three Mariners players were suspended Monday for their roles in a brawl with the Los Angeles Angels on Sunday: outfielder Jesse Winker got seven games, shortstop J.P. Crawford got five and outfielder Julio Rodriguez got two.

All three players appealed and were in the Mariners lineup on Monday night.

The Mariners acquired INF Carlos Santana and cash from the Kansas City Royals in exchange for minor league pitcher William Fleming and RHP Wyatt Mills. Santana is hitting .216 this season with four homers and 21 RBI.

Mariners: OF Kyle Lewis was on the field before the game and is getting close to going on a minor league rehab assignment. ... INF Ty France is hitting in the batting cage as he works his way back from an elbow strain, and manager Scott Servais is hopeful he can return at the end of his 10-day IL stint.

Orioles: INF Ramon Urias took batting practice Monday and is progressing from a left oblique strain that landed him on the 10-Day IL on June 11.

Seattle: The Mariners will start LHP Robbie Ray (6-6, 4.07 ERA) on Tuesday. Ray has been dominant in his past three starts, allowing 10 total hits and two earned runs while striking out 20.

Baltimore: RHP Dean Kremer (2-1, 1.71 ERA) will make his fifth start of the season Tuesday against Seattle. Kremer pitched 5 2/3 scoreless innings while allowing seven hits against the Chicago White Sox in his most recent start on June 23.