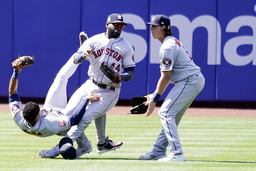 NEW YORK (AP) Houston left fielder Yordan Alvarez and shortstop Jeremy Pena were hurt when they collided in the eighth inning of Wednesday's game against the New York Mets while running down a popup.

With Pena shifted to the right side and the game scoreless, Dominic Smith popped the ball into short left. Both called for the ball and as Pena caught the pop, each hit the other in the face with his glove.

Both fell to the field and needed assistance. Alvarez was removed on a cart, sitting up, and Pena walked back to the dugout.

Chas McCormick replaced Alvarez, and Mauricio Dubon took over for Pena, who initially wanted to remain in the game.

Play resumed after a delay of about eight minutes.