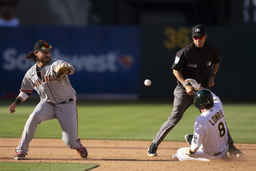 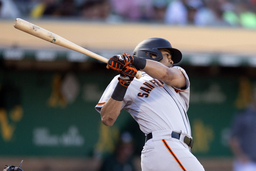 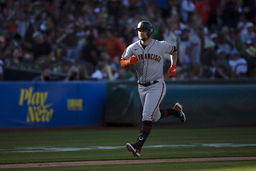 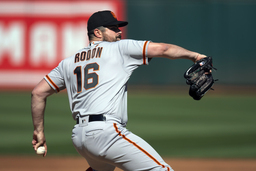 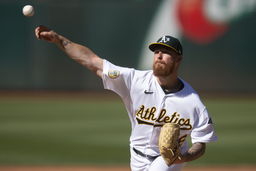 Carlos Rodon allowed one run over 5 1/3 innings for his team-leading 10th victory as the Giants won for the fourth time in 16 games since the All-Star break.

''It felt good to do something today. A good team win,'' Wade said. ''We're starting to click a little bit on both sides of the ball. Anytime at full health I think we're pretty good.''

The Giants have been banged up and missing key pieces for much of the season but got shortstop Brandon Crawford and outfielder Joc Pederson back in the lineup for the third Bay Bridge rivalry game this year.

Crawford got San Francisco going with a bases-loaded walk in the first inning, and Pederson had an RBI single in the second.

''I don't think there's any question that when our lineup is kind of deep and healthier, it feels like we have a chance to put runs on the board,'' Giants manager Gabe Kapler said. ''These are the guys that we're going to need to perform if we're going to the postseason. And it's going to need to be a lot of consistent and especially good performance. That's what we saw today.''

Wade, who doubled and scored in the second, hit his fourth home run of the season off Adam Oller (1-5) following Bart's leadoff single. Davis, acquired earlier in the week from the Mets for Darin Ruf, followed with a pinch-hit shot to center on the first pitch from Kirby Snead for his second home run in three games with his new team.

Bart hit his ninth homer in the seventh against Snead.

The seven runs are the most by the Giants since a 9-5 win over the Brewers in their last game before the break. San Francisco opened the second half with seven consecutive losses to the Dodgers and Diamondbacks and was swept by Los Angeles in another four-game series before beating Oakland for the second time in three games this season.

Skye Bolt homered for the A's. Sean Murphy had two hits and an RBI in the game between the two Bay Area rivals that drew a season-high crowd of 40,065 to the Coliseum.

Rodon (10-6) was the subject of trade talks leading up to last week's deadline after reaching an incentive that allows him to become a free agent in the offseason. But Giants general manager Farhan Zaidi held on to the Rodon, and the All-Star left-hander responded with an effective outing.

''I thought they put together some very good at-bats,'' Rodon said. ''It seems like they didn't want to swing at spin and they did a good job sticking to their plan. Almost all of them were deep into counts, full counts, 2-2 counts. I'd get ahead and they'd get back in the count with sticking to their plan. They had a really good approach against me and got me out of the game earlier than I would like.''

After allowing Murphy's two-out RBI single, Rodon fanned Ramon Laureano on a 98 mph fastball to end the third. Rodon set down seven of the next eight and left after Murphy flied out to open the sixth.

Oller allowed four runs and eight hits in five innings in his first career appearance against the Giants.

KEPT HIS EYE ON IT

Laureano provided the A's with one of their few highlights when he made a brilliant defensive play in the ninth. The veteran outfielder ran in on pinch-hitter Yermin Mercedes' short fly to right, slipped and fell on his rear end, then reached over his body and caught the ball.

''You'd say acrobatic maybe but it takes an athlete to do that and Ramon's a tremendous athlete,'' manager Mark Kotsay said. ''Thankfully he was able to control himself to a certain extent and reach back and make the play.''

Longtime A's broadcaster and two-time All-Star catcher Ray Fosse, who died of cancer last October, was named winner of the Monte Moore Award. Fosse's widow, Carol, accepted the award in her husband's honor during a pregame ceremony. Moore was a lead radio and television broadcaster for the A's starting in 1962 when the team played in Kansas City and continuing through 1980 in Oakland.

Giants: Crawford returned from a rehab assignment and started at shortstop after missing 16 games with left knee inflammation. Pederson also came back from the 7-day concussion injured list. IF David Villar was optioned to Triple-A Sacramento and IF Dixon Machado was designated for assignment.

Giants RHP Logan Webb (9-5, 3.20 ERA) starts Sunday's finale of the two-game series. Webb has lost two straight decisions and is coming off his worst outing of the season, allowing six earned runs in five innings against the Dodgers last Monday. RHP Adrian Martinez (2-2, 6.52) will be called up from Triple-A Las Vegas to start for the A's.