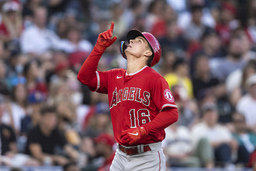 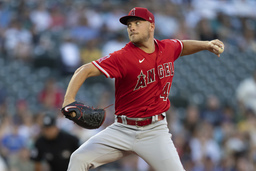 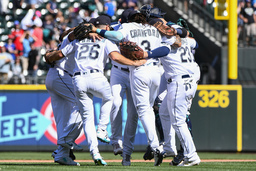 Seattle Mariners players celebrate with a group dance in center field after defeating the Los Angeles Angels in the first game of a baseball doubleheader, Saturday, Aug. 6, 2022, in Seattle. (AP Photo/Caean Couto) 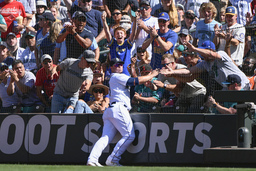 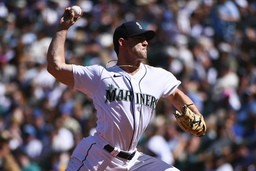 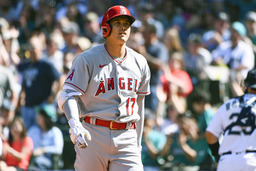 Los Angeles Angels designated hitter Shohei Ohtani reacts after being struck out during the seventh inning of a baseball game against the Seattle Mariners, Saturday, Aug. 6, 2022, in Seattle. (AP Photo/Caean Couto) 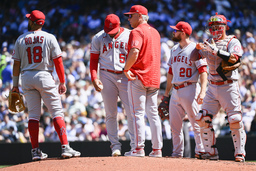 Los Angeles Angels starting pitcher Jaime Barria, second from left, is pulled from the mound during the fourth inning of a baseball game against the Seattle Mariners, Saturday, Aug. 6, 2022, in Seattle. (AP Photo/Caean Couto)

David Fletcher homered and drove in three runs for the Angels, who dropped the opener 2-1 as Ty France hit a two-run homer and George Kirby struck out eight over six innings for Seattle.

In the nightcap, Taylor Ward got the scoring started in the third with an RBI double that drove in speedy Magneuris Sierra from first base. Ward came home later in the inning on Max Stassi's single.

Moniak launched a solo shot in the fourth, making it 3-0 with his third major league homer.

The top pick in the 2016 amateur draft, Moniak was acquired from Philadelphia at Tuesday's trade deadline in a deal for pitcher Noah Syndergaard. The 24-year-old outfielder also went deep Thursday against Oakland, but began the day a .131 career hitter in 99 at-bats over 50 big league games.

Moniak exited after taking a pitch off his finger in the ninth inning on a bunt attempt. He went for X-rays, and Angels interim manager Phil Nevin was not expecting good news.

Luis Torrens put the Mariners on the board in the fifth with a home run to right-center against Detmers, his first of the season.

Detmers (4-3) was dominant early, allowing just one hit through four innings. After the hiccup in the fifth, the rookie left-hander settled back in. He permitted six hits overall and struck out seven.

''He was awesome. You're seeing a really good one just growing before our eyes,'' Nevin said. ''Pitching deep into a game like that, being able to get out of a jam there in the seventh, and reaching back out against the guy who hit the ball hard against him a couple times. It was a big outing for him.''

Fletcher extended the Angels' lead to 5-1 with a two-run homer off starter Chris Flexen in the sixth.

''It's always huge when we have run support,'' Detmers said. ''The last couple outings, I've had run support. We got on the board early and credit to them, they just kept going.''

Mariners reliever Matt Brash tossed a scoreless seventh, but lefty Brennan Bernardino allowed two runs in the ninth - one on an RBI single from Fletcher, the other on a bases-loaded sacrifice fly by Shohei Ohtani.

In the first game, Moniak gave the Angels a one-run lead with an RBI single in the second, but France's third-inning homer into the left-field bullpen put the Mariners ahead for good. The go-ahead drive was France's 14th homer of the season and his 300th hit with the Mariners.

Kirby (3-3) got the win, while Jaime Barria (1-2) was tagged with the loss in his first start this season. Erik Swanson pitched the ninth for his third save.

It was Kirby's second victory since being recalled from Triple-A Tacoma on July 23. The Mariners optioned him down on July 9 to limit the rookie's workload.

''He's looked great,'' Seattle manager Scott Servais said. ''After we shut him down and gave him a little breather, he has come back and has thrown very well. The velo is still there, the secondary stuff is there, and he has looked strong. That is exactly what we need out of him going forward.''

Mariners: OF Mitch Haniger (ankle) was activated from the 60-day injured list prior to the second game and penciled into the No. 3 spot in the lineup. Haniger had been out since sustaining a high right ankle sprain against Miami on April 29. In a corresponding move, INF Abraham Toro was optioned to Tacoma.

Angels: LHP Tucker Davidson (1-2, 6.46 ERA) starts Sunday after being obtained from Atlanta at Tuesday's trade deadline. Davidson has allowed 11 earned runs, 15 hits and 13 walks in 15 1/3 innings this season with 10 strikeouts.