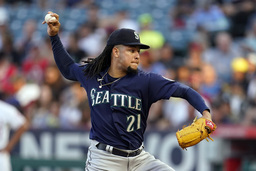 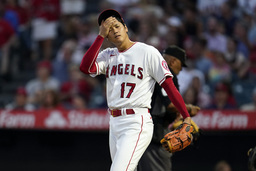 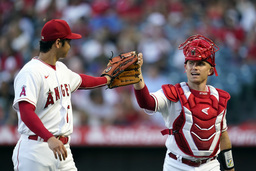 Los Angeles Angels starting pitcher Shohei Ohtani, left, taps gloves with Max Stassi at the end of the top of the second inning of a baseball game against the Seattle Mariners on Monday, Aug. 15, 2022, in Anaheim, Calif. (AP Photo/Marcio Jose Sanchez) 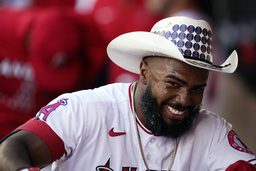 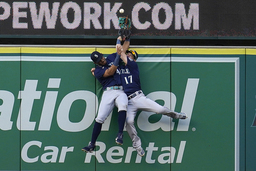 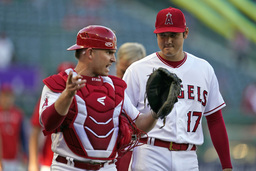 ANAHEIM, Calif. (AP) Shohei Ohtani turned in his usual strong start. Long after he was gone, things were anything but normal.

The Seattle Mariners scored four runs in a chaotic ninth inning, taking advantage of the Angels' fielding woes for a 6-2 victory over Los Angeles on Monday night.

''There's a lot to unpack. What started out as very normal game with two good starting pitchers out there got crazy at the end,'' Seattle manager Scott Servais said.

Jesse Winker and J.P. Crawford each had two hits and two RBIs for the Mariners, who vaulted over Toronto and Baltimore into the top wild-card spot in the AL.

Winker, who homered in the first inning, has reached base in 12 of his last 13 games and also has four home runs in that span.

Ohtani struck out eight and allowed two runs in six innings. It was the first time since May 18 at Texas that the AL MVP had a no-decision. The Japanese two-way phenom had gone 7-5 with a 2.60 ERA in his last 12 starts.

''The biggest flaw today is that I threw too many balls,'' said Ohtani through interpreter Ippei Mizuhara.

The Angels had far bigger flaws after he departed.

The game was tied at 2 going into the ninth inning before the Mariners broke through. Sam Haggerty got aboard with a one-out single off Aaron Loup (0-4). Haggerty advanced to second when Angels catcher Max Stassi wildly threw to the bag even though Haggerty wasn't running. Haggerty stole third and then scored the go-ahead run on another fluky play.

With runners at the corners, Julio Rodriguez hit a line drive directly at Luis Rengifo. The normally sure-handed Rengifo, who was at second base after David Fletcher left with an injury, dropped the liner and threw home. Haggerty was caught in a rundown but ended up scoring when no one was covering home plate.

''My first thought was to keep us in the inning and stop the double play. I saw Rengifo drop it and my first thought is to get a throw home,'' said Haggerty, who described the entire inning as chaotic. ''I wanted to stay in the rundown to give our runners another chance to advance. I turn my head and don't see anyone at home, and I went for it.''

Seattle got some breathing room when Dylan Moore scored on Ty France's grounder, after Stassi was unable to hold onto the throw to the plate for his second error of the inning. Rodriguez scored on Winker's grounder and Crawford's base hit plated France.

Ohtani threw 97 pitches, including 67 strikes. His pitch arsenal included a season-high 52 fastballs and he threw a 2-seam fastball for the first time this season in a game (six pitches). Ohtani said it was something he had been working on during bullpen sessions and he wanted to try it out in a game.

Rengifo homered while Jared Walsh had two hits and an RBI.

Luis Castillo, making his third start since being acquired from Cincinnati at the trade deadline, struck out nine in six innings.

The teams traded two-out solo homers in the first. Winker went deep to right center on a full-count slider by Ohtani. It was the fifth time Ohtani allowed a home run in the opening frame and the first since he gave up a pair against the Yankees on June 2.

Rengifo tied it with the help of Seattle's outfield. Center fielder Rodriguez tried to call off right fielder Mitch Haniger, but both players jumped at the ball in right-center. The ball bounced off Rodriguez's glove and over the yellow line, giving Rengifo his eighth homer of the season. It was originally ruled a triple before being overturned by replay.

The ninth inning also included plate umpire Laz Diaz losing track of the count on Carlos Santana's at-bat. Instead of it being 2-2, Diaz changed the count to 3-1.

After the fourth pitch, Santana asked him if he was at 3-1: ''I said, no it's 2-2. Then I started thinking, maybe it is 3-1, because I forgot I called that first pitch a strike,'' Diaz said. ''There were so many pitches going on, I lost the count on that first pitch. I knew I called a strike on the steal, and that's the only one I remembered. I couldn't remember the one before that.''

Diaz said the Angels could have challenged the revised count but didn't.

Ohtani has 165 strikeouts, which is tied for fifth in the majors. That's the third-most strikeouts through the first 20 starts of the season by an Angels pitcher, behind only Nolan Ryan, who had 211 in 1977 and 182 in 1973.

Angels: CF Mike Trout (left ribcage inflammation) took live batting practice, ran the bases and did some defensive drills before the game. There is a possibility that the three-time AL MVP could be activated before the start of a 10-game road trip on Friday. ... Fletcher was removed from the game in the seventh inning due to a left foot contusion.