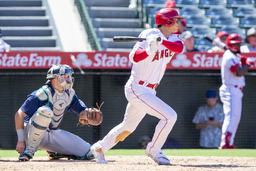 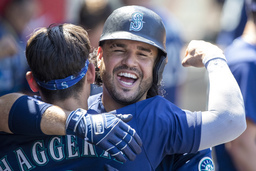 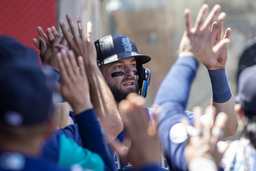 Seattle Mariners' Sam Haggerty is congratulations by teammates after scoring on a single by Carlos Santana during the third inning of a baseball game against the Los Angeles Angels in Anaheim, Calif., Wednesday, Aug. 17, 2022. (AP Photo/Alex Gallardo) 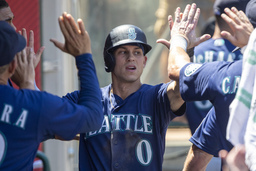 Seattle Mariners' Sam Haggerty is congratulated by teammates in the dugout after scoring against the Los Angeles Angels in the third inning of a baseball game in Anaheim, Calif., Wednesday, Aug. 17, 2022. (AP Photo/Alex Gallardo) 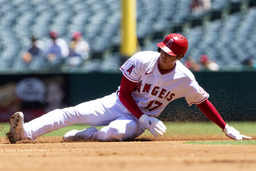 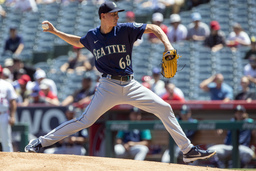 Ohtani is a two-way superstar, but he's only one man - and the Seattle Mariners didn't have much trouble with the other 25 Angels while completing an impressive series sweep.

Cal Raleigh homered twice, Eugenio Suarez and Jesse Winker each hit a two-run shot, and the Mariners overcame Ohtani's excellence for an 11-7 victory over the Halos on Wednesday.

Raleigh had the first multi-homer game of his career with a solo shot in the fifth inning and a two-run homer in the ninth for the Mariners, who moved into the top AL wild-card slot while scoring 25 runs in three straight wins at the Big A. Seattle is an AL-best 36-15 since June 21.

Ohtani went 4 for 5, hitting his 27th homer in the ninth after he tripled in the seventh and got two singles earlier in his latest outstanding day at the plate. The AL MVP's fourth career four-hit game - his first since June 2019 - gave him seven hits in the last two games.

And in yet another reprise of the major theme in Ohtani's stateside career, both of those games were blowout losses as the Mariners swept a three-game series at Angel Stadium for the first time since September 2016.

''Yeah, Ohtani was on everything,'' Seattle manager Scott Servais said. ''They kept coming back on us, but we did some awesome stuff offensively.''

Carlos Santana had a two-run single during the Mariners' four-run third inning, and George Kirby (5-3) pitched six-hit ball into the sixth while getting ample run support in his third consecutive victory.

''It's really cool to see those guys getting after it,'' Kirby said. ''Some guys are hitting their strides. Going to be fun down the stretch, for sure.''

Luis Rengifo added an RBI double before leaving with low back tightness for the Angels, who had won five of six until getting flattened in the path of Seattle's push toward a playoff spot.

At least Los Angeles got good news before the game when Mike Trout said he plans to return this weekend from a five-week injury absence, but the long-struggling club ended the day by getting swept in a series for the first time since the All-Star break.

After spot starter Touki Toussaint (1-1) opened with two scoreless innings for the Angels, six Mariners reached base against him in the third. Mitch Haniger had an RBI single and J.P. Crawford drew a bases-loaded walk before Santana chased Toussaint.

''They've got really good hitters over there that don't chase much,'' Angels interim manager Phil Nevin said of the Mariners. ''When you don't put it over the plate or you're behind in the count, you can get hurt.''

Suarez hit his 20th homer and Raleigh followed with his 17th in the fifth before Winker added his two-run shot in the sixth, all off reliever Mike Mayers.

Rengifo followed Ohtani's RBI single with a run-scoring double in the fifth. Ohtani then tripled and scored on Taylor Ward's flyout.

Seattle has the majors' longest postseason drought at 20 years, while the Angels' current seven-year drought - tied with Detroit - will become the longest in the sport if the Mariners and Philadelphia stay on track to reach the postseason this October.

Angels: Rengifo didn't return to the field in the eighth after grounding out in the seventh. Nevin said he expects to play Friday. Rengifo has been the Angels' best hitter for most of the summer, getting a hit in 41 of his last 47 games. ... Trout intends to return to the lineup Friday in Detroit. The three-time AL MVP has missed 30 games since July 12 with an injury to his upper back and ribcage, but he was determined not to have an early end to his second consecutive season after playing in only 36 games last year. The Halos likely will have to release a player to put Trout back on the roster.

Mariners: After a day off that will include a golf outing for several M's, Marco Gonzales (7-12, 4.18 ERA) takes the mound at Oakland on Friday to open a three-game weekend series.

Angels: After a day off, hard-luck left-hander Patrick Sandoval (3-8, 3.42 ERA) takes the mound at Detroit on Friday to open a 10-game trip.