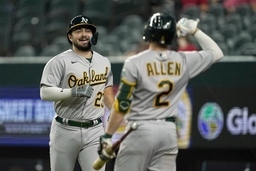 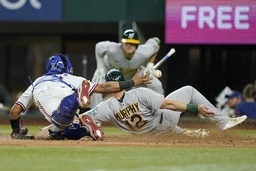 Texas Rangers catcher Meibrys Viloria loses the ball while trying to tag out Oakland Athletics' Sean Murphy (12) who scored on a single by Chad Pinder in the eighth inning of a baseball game, Wednesday, Aug. 17, 2022, in Arlington, Texas. (AP Photo/Tony Gutierrez) 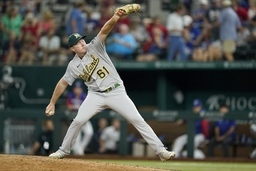 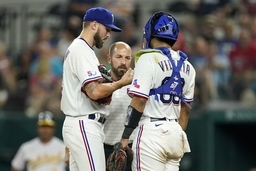 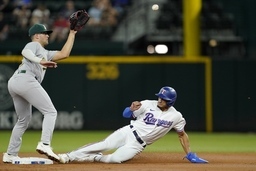 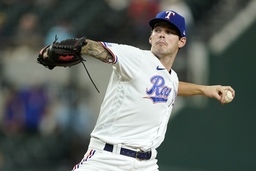 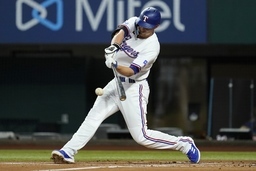 Texas Rangers' Corey Seager connects for a single in the first inning of a baseball game against the Oakland Athletics, Wednesday, Aug. 17, 2022, in Arlington, Texas. (AP Photo/Tony Gutierrez) 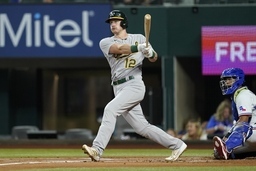 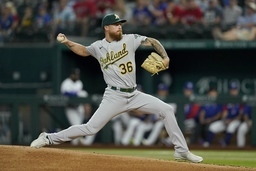 ARLINGTON, Texas (AP) Sean Murphy had his second two-homer game and rookie Shea Langeliers hit his first major league home run in his second game with Oakland, leading the Athletics to a 7-2 win over the Texas Rangers on Wednesday night.

Murphy pulled a solo home run to left field in the first inning and launched an opposite-field, two-run shot into the home bullpen in right-center in the third inning.

Langeliers, from nearby Keller, Texas, homered on an 0-2 pitch to the opposite field into the same bullpen with one on during Oakland's four-run eighth inning. The 24-year-old was called up Tuesday and doubled on the first pitch he saw.

''I was kind of just telling myself let the ball travel and be smooth through the baseball and use the big part of the field,'' Langeliers said.

During batting practice, A's manager Mark Kotsay told Langeliers he'd pay him $100 for a homer into that bullpen.

''I didn't think it was going to get out,'' Kotsay said. ''I was actually yelling for it to get down. Thankfully it cleared the fence.''

Murphy doubled in the eighth inning and scored, extending his hitting success at Globe Life Field. He has a .347 batting average with eight homers and 17 RBI in 18 games played at the ballpark. His first multi-homer game came in his third career start, on Sept. 19, 2019, at Houston.

''No rhyme, no reason,'' Murphy said of his success at Globe Life Field. ''You say that, and tomorrow I take an 0-for.''

A's rookie righthander Adam Oller (2-5), from the Houston area, allowed one run - his fewest in 10 starts - on five hits with four strikeouts and one walk.

Both of Murphy's home runs came off rookie left-hander Cole Ragans (0-2), who gave up three runs on four hits and one walk in five innings while striking out three. It was Ragans' third big league start.

The A's, with the worst record in the American League, have won two consecutive games following a nine-game losing streak.

''We came prepared to play a game tonight,'' interim manager Tony Beasley said. ''We lost. We got beat. We're not going to blame it on anybody.''

Adolis Garcia and Mark Mathias hit RBI doubles for Texas in the first and ninth innings. Mathias' came in as a pinch-hitter in his debut with the Rangers. Garcia has a 14-game hitting streak.

The Rangers' Nathaniel Lowe had a 22-game on-base streak snapped.

The final out, Marcus Semien's groundout to shortstop, was challenged by Texas contending A's 1B David MacKinnon came off the bag. The call was quickly upheld.

Thursday afternoon's finale to the four-game series will match A's rookie LHP Zach Logue (3-6, 5.49 ERA) against Rangers RHP Dane Dunning (2-6, 4.12). Logue was recalled from Las Vegas last Saturday for his sixth stint with the club this season. He allowed four runs on seven hits, including two home runs, in 2 1/3 innings in an 11-4 loss to Texas on May 28. Dunning is 1-0 in his last six starts, and that win came by limiting the Chicago White Sox to no runs and one hit on Aug. 6.