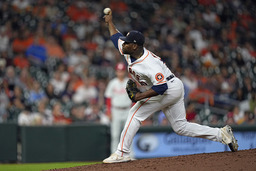 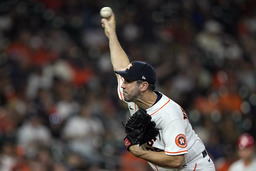 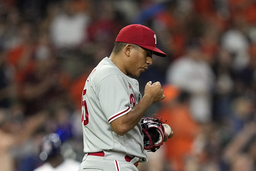 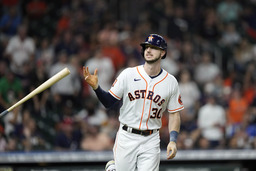 Houston Astros' Kyle Tucker (30) flips his bat after hitting a three-run home run against the Philadelphia Phillies during the first inning of a baseball game Tuesday, Oct. 4, 2022, in Houston. (AP Photo/David J. Phillip) 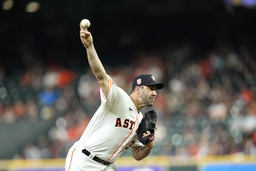 HOUSTON (AP) After capping his magnificent comeback season with another stellar start Tuesday night, Justin Verlander was too busy looking ahead to reflect too much on what he's accomplished already.

''I wouldn't be who I am or in this position now if I just was happy with where I finish the regular season. ... I'm already trying to prepare myself for the postseason and get ready for that,'' he said. ''But at the same time, I see the numbers, I know how good they are, and I do appreciate it.''

Verlander struck out 10 without allowing a hit in five innings, and Houston's bullpen kept the Philadelphia Phillies hitless until the ninth inning in a 10-0 win.

Verlander, who has pitched three no-hitters in his career, walked one before being pulled after 77 pitches. The AL West champion Astros led the NL wild-card Phillies 8-0 at that point.

''It's great to have him on the mound,'' manager Dusty Baker said. ''The team's excited, the fans are excited, I think baseball is excited when he's on the mound on a national stage like that. He's some pitcher.''

Rookie Hunter Brown pitched 2 1/3 hitless innings and Hector Neris got the last two outs of the eighth inning. Will Smith came on for the ninth and Garrett Stubbs singled to center field to break up the no-hit bid, causing a smattering of boos from the crowd.

''About the fifth inning you start thinking about it,'' Baker said of the possibility of a no-hitter. ''You start counting the amount of outs ... everybody in our bullpen, the guys that came in, they wanted to be a part of it.''

Added Verlander: ''It didn't work out. It wasn't our night.''

Jeremy Pena, Kyle Tucker and Martin Maldonado homered as the Astros jumped on Ranger Suarez (10-7) for six runs in two innings to build a huge lead early in their 1,000th win at Minute Maid Park, which opened in 2000.

Verlander (18-4) collected his American League-leading 18th win, and his MLB-leading 1.75 ERA is the lowest for a qualified pitcher in the AL, excluding the pandemic-shortened season, since Pedro Martinez posted a 1.74 ERA in 2000.

The two-time Cy Young Award winner's ERA is also the lowest of his career, besting his 2.40 ERA in 2011, when he won his first Cy Young and was also named AL MVP while with Detroit.

Verlander, who also won the Cy Young in 2019, is a top candidate to win the award for a third time this season after returning to form following an almost two-year absence following Tommy John surgery.

''To me, this is maybe not what was supposed to happen, but what I expected to happen,'' he said. ''I didn't know exactly how good the season would be, but I thought I would be me when I'm healthy - which is usually pretty good.''

The 39-year-old Verlander was dominant from the start Tuesday, fanning eight consecutive batters at one point to set a career-high and tie a franchise record.

That eight-strikeout streak started when he got Darick Hall to end the first. He then struck out the side in the second and third innings before striking out Bryce Harper to start the fourth.

The streak ended when Alec Bohm grounded out after that. Verlander didn't allow a baserunner until Brandon Marsh walked to start the fifth.

But he got right back on track, retiring Bryson Stott and Nick Maton before Matt Vierling grounded into a force-out to end the inning.

Verlander received a nice ovation as he walked to the dugout and he tipped his cap to the crowd just before stepping off the field.

He would have pitched a little longer Tuesday, but caused the top of one of his fingers to bleed by ''clicking it'' on his glove. Verlander said it's something he's dealt with before and it wasn't serious, but he didn't see a reason to push it at this point in the season.

Harper and Marsh played Tuesday, but the Phillies fielded a lineup missing many of their regular starters after clinching their first playoff berth since 2011 a night earlier.

Jose Altuve hit a leadoff double before Pena homered to center field to make it 2-0. Yordan Alvarez then doubled off the wall in left field and Alex Bregman walked.

Tucker then smacked a ball to the seats in right field to extend the lead to 5-0.

Maldonado pushed it to 6-0 when he opened Houston's second with his shot to left-center.

Christian Vazquez and Mauricio Dubon each hit an RBI single in the sixth inning to make it 8-0.

There have been three no-hitters this season, including two combined no-hitters.

Astros: Bench coach Joe Espada was not feeling well Tuesday and was not at the ballpark.