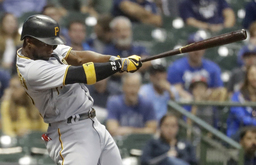 Pittsburgh Pirates' Andrew McCutchen hits his 200th career home run during the first inning of a baseball game against the Milwaukee Brewers, Wednesday, Sept. 13, 2017, in Milwaukee. McCutchen is returning to the Pirates. A person with knowledge of the agreement tells the Associated Press the veteran centerfielder, a five-time All-Star and the 2013 National League MVP for the Pirates earlier in his career, has agreed to a one-year deal with the club.(AP Photo/Morry Gash, File)

PITTSBURGH (AP) Andrew McCutchen is back where he once belonged.

The five-time All-Star centerfielder finalized a $5 million,one-year deal to return to the Pittsburgh Pirates on Friday, nearly five years to the day after Pittsburgh sent him to San Francisco in a cost-cutting measure.

McCutchen served as the centerpiece for Pittsburgh's brief return to contention nearly a decade ago. He won the National League's MVP Award in 2013, a season that marked the start of a three-year run in which the Pirates reached the playoffs as a wild card.

The 36-year-old has bounced around professionally since being traded to San Francisco but has maintained a home in Pittsburgh. He spent 2022 with Milwaukee, hitting .237 with 17 home runs and 69 RBIs.