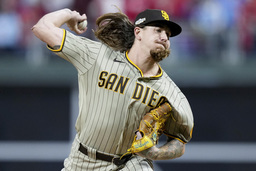 Olivia Finestead publicly revealed the allegations in an Instagram post Tuesday. Clevinger, a 32-year-old right-hander and a six-year major league veteran, agreed to a $12 million, one-year contract as a free agent that was announced on Dec. 4.

Sam Levinson, one of Clevinger's agents, did not respond to a request for comment.

Finestead said she is the mother of Clevinger's child and alleged he fathered two other children that were not hers. She posted a photo of marks on her body with accompanying words that alleged the injuries were ''from when he threw an iPad at me pregnant'' and ''finally left when he strangled me.''

''Mike Clevinger,'' she added, ''you really deserve hell I've kept quiet now for almost a year and you continue to covertly abuse your infant.'' She said Clevinger ''threw chew spit on our baby.''

The Athletic reported Finestead told it she notified MLB of her allegations last summer.

The Associated Press typically does not identify victims of domestic violence or sexual assault unless they agree to be named or come forward publicly with their allegations, as Finestead has.

Dodgers pitcher Trevor Bauer was suspended for two seasons by MLB last April under the domestic violence policy following an investigation that started the previous July. The suspension was cut to 194 games by an arbitrator last month, and the Dodgers released the former Cy Young Award winner. The suspension cost Bauer more than $37 million from his $102 million, three-year contract through the 2023 season