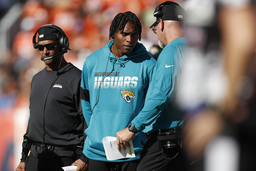 Jacksonville Jaguars cornerback Jalen Ramsey, center, talks with defensive coordinator Todd Wash as he stands on the sidelines during the first half of an NFL football game against the Denver Broncos, Sunday, Sept. 29, 2019, in Denver. (AP Photo/David Zalubowski) 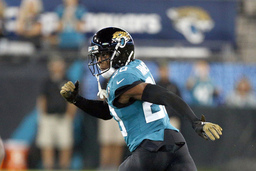 In this Thursday, Sept. 19, 2019, file photo, Jacksonville Jaguars cornerback Jalen Ramsey covers a Tennessee Titans player during the first half of an NFL football game in Jacksonville, Fla. The Jaguars have no idea what's next for disgruntled cornerback Jalen Ramsey. If the past is any indication, it's sure to include something out of the ordinary.(AP Photo/Stephen B. Morton, File)

Ramsey missed seven consecutive practices because of illness, back tightness and the birth of his second daughter. His back caused him to miss the last two games. He saw a specialist in Houston on Monday.

Marrone says the visit ''just confirmed what our doctors have said.''

The two-time Pro Bowl selection told the Uninterrupted's ''17 Weeks'' podcast last week that he's dealt with back soreness at times during his NFL career. He appeared on the team's injury report twice in 2017 with a back injury but played both weeks.

Ramsey requested a trade last month following a heated argument with Marrone on the sideline in Houston and a much-less-public exchange with personnel chief Tom Coughlin after the game.

Team owned Shad Khan told The Associated Press last week that he has no plans to trade Ramsey.

Fatal error: Call to a member function Query() on null in /rtfs/football/php/classes/FootballPlayer.php on line 1479