Browns’ Garrett not yet set on appeal hearing for suspension 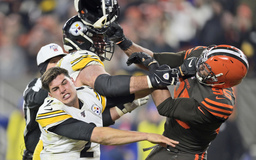 CLEVELAND (AP) The NFL says Browns defensive end Myles Garrett has not yet scheduled the appeal hearing for his indefinite suspension.

Garrett was suspended for at least the last six regular-season games and playoffs Friday for ripping off Pittsburgh quarterback Mason Rudolph's helmet and striking him on the head with it. Garrett is appealing the ban, the longest in league history for a single on-field infraction.

Steelers center Maurkice Pouncey's appeal of his three-game suspension for fighting will be heard Tuesday in New York. Pouncey's threw several punches and kicked Garrett after he clobbered Rudolph.

The league is also expected this week to announce fines for players who left the sidelines during the melee.

The Browns and Steelers play again in Pittsburgh on Dec. 1.

The Seattle Seahawks Defense got a takeaway in Week 2, but they struggled to slow down the New England Patriots all game long. They ran up 30 points on them and nearly lost the game late before a goal-line stand against quarterback Cam Newton. Cornerback Quinton Dunbar snagged an interception, but that was about the only positive this defense had, with only one sack on the night. Based on what we've seen through two weeks, it looks like this defense should be faded when you're looking for streaming options after allowing 55 points through two games. 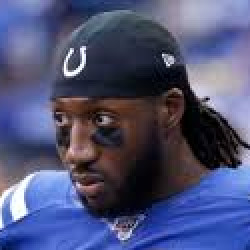 Indianapolis Colts tight end Mo Alie-Cox took advantage of his opportunity, grabbing five balls for a game-high 111 receiving yards in Week 2 against the Vikings. Alie-Cox was inserted in the starting lineup due to an injury to starting tight end Jack Doyle. This was just the fourth start of his three-year career, and it is the first time where he had over two catches in a game. It was a nice performance, but this is more of a statistical anomaly than something we can expect to see going forward. He will have a good matchup next week against the Jets, but do not expect to see the same performance, especially if Doyle returns to the fold.

Seattle Seahawks wide receiver Tyler Lockett wasn't quite perfect in Week 2, but he was pretty close to it. He caught seven of his eight targets for 67 yards and a touchdown. Lockett is quickly becoming one of the best fantasy wide receivers to roster, and with the connection he has with quarterback Russell Wilson, he's a threat to finish as a WR1 on a weekly basis. Just like Wilson, you should have no doubts about starting him every week, regardless of his matchup. 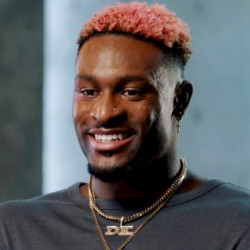 Seattle Seahawks wide receiver DK Metcalf went long again in Week 2 and he turned in another solid fantasy outing. He caught four of his six targets for 92 yards and a touchdown. This is the second week in a row that Metcalf has averaged over 20 yards per reception, and it's clear that this offense is content to allow quarterback Russell Wilson to stretch the field more and more. As long as Wilson is airing it out, Metcalf is going to have WR2 upside on a weekly basis thanks to his big-play ability. His performance on Sunday night was even more impressive, considering the fact that he was being covered by Patriots All-Pro cornerback Stephon Gilmore. Metcalf is the real deal, folks. 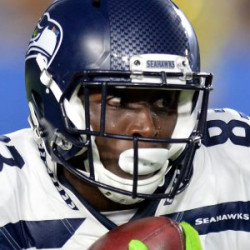 Seattle Seahawks wide receiver David Moore had the most improbable touchdown of the season on Sunday night, but it counts just the same. He caught all three of his targets for 48 yards and the score. Due to wide receiver Phillip Dorsett's (foot) injury, the third wide receiver role in Seattle is up for grabs. He's shown a connection with quarterback Russell Wilson so far in his career, and as long as Dorsett remains out, Moore is going to present WR4/5 value on a weekly basis in deeper leagues. 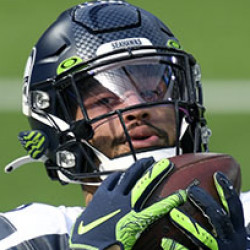 Seattle Seahawks wide receiver Freddie Swain seized the day in Week 2. Thanks to a nifty route design, he was wide open to catch his only target en route to a 21-yard touchdown. It was clear that Swain was the fourth receiving option among pass-catchers when you don't include the running backs. Moving forward, he's going to be nothing more than a flyer in extremely deep leagues, but you could be doing much worse than getting a talented pass-catcher in one of the league's best offenses. 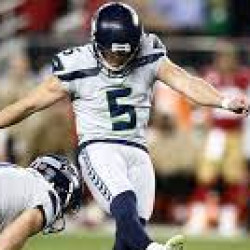 Seattle Seahawks kicker Jason Myers was perfect in Week 2, but he was unable to get any field-goal opportunities due to his efficient offense. He went 5-for-5 on his extra points, and it was nice to get a solid outing from him. It's unlikely that this offense is going to score touchdowns exclusively moving forward, and you should get safe production out of him every week. If you're looking for a kicker that's going to get you points every week because of Seattle's high-scoring offense, Myers should be on your radar.

Seattle Seahawks quarterback Russell Wilson finished another phenomenal night in Week 2 with a thrilling win over the New England Patriots. He finished the night 21 of 28 for 288 yards with five touchdowns and one interception. He also added five carries for 39 yards on the ground. His impressive performance nearly wasn't enough, but his defense was able to hold on for a win. Wilson looks like the early favorite for the MVP award, and he's going to be winning a lot of fantasy MVPs if he keeps playing at this level. Fire him up every week with no doubts.

Seattle Seahawks running back Chris Carson continues to be a valuable fantasy asset with a solid performance in Week 2. Carson finished with 17 carries for 72 yards to go with three catches for 36 yards and a touchdown that came late in the game. Carson is firmly in the RB2 conversation, and he has RB1 upside on a weekly basis thanks to his work in the passing game in this explosive offense. While he may not finish every game with a bloated stat line, he tends to come up with a solid performance by the time it's all said and done. Keep him in your lineups moving forward.

Tampa Bay Buccaneers WR Chris Godwin (concussion) has cleared the concussion protocol and is good to go for Week 3 against the Denver Broncos.

Fantasy Spin: The Broncos were bitten hard by the injury bug, and Godwin should be a low-end WR1 play next week.

Fantasy Spin: Mike Davis could be the featured back if the team doesn't go outside the organization for help. He should be owned everywhere as a flex option. Curtis Samuel had four rushes in Week 2, and he could continue to see a small workload in the backfield, but it doesn't move the needle much for fantasy purposes.

Fantasy Spin: Chris Hogan had six grabs for 75 yards in Week 2. He'll continue to be highlighted and should be owned for depth.

Fantasy Spin: Wayne Gallman and Dion Lewis figure to divvy up the workload, and neither of them will replace Barkley in fantasy for you. However, both should be owned as flex options. The team plans to meet with Devonta Freeman, and he could be worth the speculative pickup as well.

Updating previous reports, Denver Broncos WR Courtland Sutton (knee) is feared to have a significant knee injury, according to sources.

Fantasy Spin: DaeSean Hamilton is next up on the depth chart, and he could be worth the pickup off waivers for depth if Sutton is out a lengthy period.

Fantasy Spin: Mike Davis is likely next in line, and he needs to be added in most leagues as a flex option.

Free-agent DE Ziggy Ansah (Lions) is flying to meet the San Francisco 49ers with the expectation of signing with them after going through COVID-19 testing.