2022 Season Cut Down Deadline Is Saturday

Remember the cut down date is Saturday September 24th. Your roster should be cut down to 12 players at this point. You may roster up to 20 players until that point. 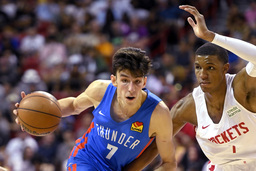 Oklahoma City Thunder's Chet Holmgren (7) drives against Houston Rockets' Jabari Smith II during the second half of an NBA summer league basketball game on July 9, 2022, in Las Vegas. Holmgren is experiencing the rehab process for the first time. The No. 2 pick in the 2022 NBA draft suffered a right foot injury during a pro-am game in August, and the Thunder declared him out for the season. (AP Photo/David Becker, File)