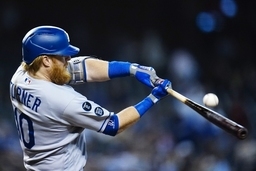 Los Angeles Dodgers' Justin Turner fouls off a pitch during the ninth inning of a baseball game against the Arizona Diamondbacks, Sunday, Sept. 26, 2021, in Phoenix. The Dodgers defeated the Diamondbacks 3-0. (AP Photo/Ross D. Franklin) 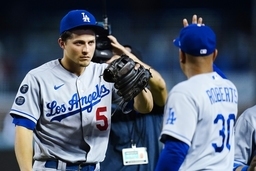 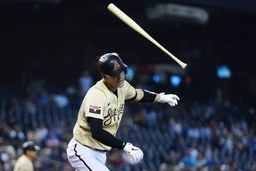 Arizona Diamondbacks' Carson Kelly flips his bat away as he flies out against the Los Angeles Dodgers during the third inning of a baseball game Sunday, Sept. 26, 2021, in Phoenix. (AP Photo/Ross D. Franklin) 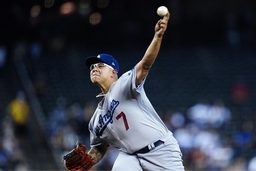 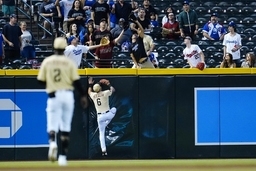 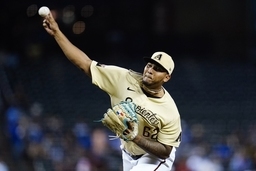 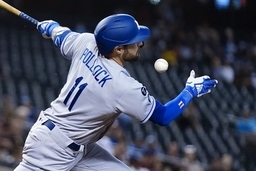 Los Angeles Dodgers' AJ Pollock fouls a ball off his face during the first inning of a baseball game against the Arizona Diamondbacks Sunday, Sept. 26, 2021, in Phoenix. (AP Photo/Ross D. Franklin) 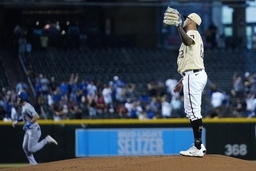 PHOENIX (AP) The dominant Dodgers rolled to win No. 100 of the season on Sunday afternoon with a mix that's served them well all season: terrific starting pitching, a few long homers and a shutdown bullpen.

It still might not be enough to catch the San Francisco Giants.

Corey Seager hit two solo homers and Julio Urias posted his MLB-leading 19th victory, but the Dodgers remained two games back in the NL West after a 3-0 win over the Arizona Diamondbacks.

The Giants won for the 17th time in 21 games by beating the Rockies 6-2 on Sunday. Seager said the Dodgers are just trying to win as many games down the stretch to give themselves a chance at avoiding the NL wild-card game.

''You never want to be in second place,'' Seager said. ''But we just want to play good baseball going into the playoffs.''

Seager and Trea Turner both hit their 100th career home runs during the 100th win. Seager reached the mark with his second homer, a drive estimated at 464 feet in the third inning that landed deep in the seats and gave the Dodgers a 3-0 lead.

''I just tried to stay on the fastball,'' Seager said. ''He put a few over the plate and I put a good swing on them.''

Los Angeles hit the century mark in wins for the third time in the past four full seasons, not counting the coronavirus-shortened 2020 schedule. They're trying to win the NL West for the ninth straight season.

The Dodgers won 16 of 19 games against the D-backs this season. Kenley Jansen earned his 36th save. Justin Bruihl, Joe Kelly and Corey Knebel also pitched scoreless innings of relief.

Urias (19-3) is the only pitcher in baseball with a chance to earn 20 wins this year, provided he gets one more start next weekend against the Milwaukee Brewers. The left-hander scattered five hits over five scoreless innings, striking out three and walking one.

''The body of work - winning 19 games - it's special,'' Dodgers manager Dave Roberts said. ''The object of the game is still to win. Wins matter.''

Seager and Turner hit solo homers on back-to-back pitches in the first inning for a 2-0 lead off Humberto Mejia. Turner's was especially well-struck, coming off the bat at 108.5 mph and traveling 418 feet.

Mejia (0-3) gave up three runs, all on the three homers. He lasted just 2 2/3 innings, giving up four hits, walking three and striking out one. Henry Ramos had two hits for the D-backs, including a double.

''We had a couple opportunities and we just didn't execute at critical times when we needed to,'' Arizona manager Torey Lovullo said.

The Diamondbacks fell to 50-106. They need at least two wins over their final six games to avoid matching or setting the record for worst season in franchise history. Arizona was 51-111 in 2004.

Seager and Turner became the first set of teammates to hit their 100th homer in the same game since Jay Gibbons and Melvin Mora did it for Baltimore in 2005, according to baseball-reference.com.

The Dodgers called up LHP Andrew Vasquez to the big leagues and sent OF Luke Raley to the minors.

Dodgers: OF A.J. Pollock was hit by a pitch on the middle finger of his right hand but Roberts said the veteran is expected to be OK.

''We dodged a bullet,'' Roberts said.

Diamondbacks: SS Nick Ahmed was placed on the 10-day injured list with right shoulder inflammation, which will end his season. Arizona called up SS Geraldo Perdomo to take his spot on the roster. Perdomo started on Sunday. The 31-year-old Ahmed had a disappointing year - particularly at the plate - batting .221 with five homers over 129 games.

The Dodgers have Monday off before host a three-game series against the San Diego Padres. RHP Walker Buehler (14-4, 2.58) will start Tuesday's opener for Los Angeles.

The Diamondbacks have Monday off before traveling to San Francisco for a three-game series against the Giants. Arizona will start RHP Luke Weaver (3-6, 4.38) in the opener on Tuesday.