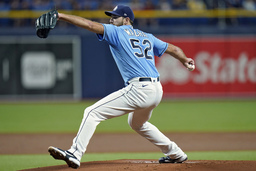 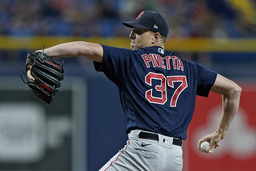 ST. PETERSBURG, Fla. (AP) Kevin Kiermaier broke up a combined no-hit bid by the Boston Red Sox with a one-out double in the eighth inning and Manuel Margot scored on a wild pitch in the ninth to give the Tampa Bay Rays a 1-0 victory Thursday night.

Margot got Tampa Bay's second hit, a two-out single in the ninth off Matt Barnes (3-2). He stole second and went to third on a throwing error by catcher Christian Vazquez.

Margot came off the bench to pinch-hit in the seventh and was intentionally walked.

Kiermaier lined his opposite-field double to left off Darwinzon Hernandez, the third Red Sox pitcher. The Gold Glove center fielder also threw out a runner at the plate in the seventh.

Boston starter Nick Pivetta was pulled with a runner on second and two outs in the seventh after throwing 100 pitches. His career high is 116.

Josh Taylor got the final out in the seventh before giving way to Hernandez.

The no-hitters this season were thrown by San Diego's Joe Musgrove (April 9), Carlos Rodon of the Chicago White Sox (April 14), Baltimore's John Means (May 5), Cincinnati's Wade Miley (May 7), Detroit's Spencer Turnbull (May 18) and the New York Yankees' Corey Kluber (May 19).

In addition, Arizona's Madison Bumgarner pitched a seven-inning hitless game in a doubleheader on April 25 that is not recognized as a no-hitter by Major League Baseball.

The Astros threw the most recent combined no-hitter in the majors, when Aaron Sanchez, Will Harris, Joe Biagini and Chris Devenski blanked Seattle on Aug. 3, 2019.

Tampa Bay starter Michael Wacha, who took a no-hitter into the fifth, allowed one hit and two walks in five innings. He had seven strikeouts.

Vazquez got the game's first hit with two outs in the fifth when he lifted a soft fly ball to center on a half-swing against an 88 mph changeup.

Vazquez stole second and went to third on Mejia's throwing error but was stranded when Bobby Dalbec struck out.

Hunter Renfroe had a leadoff double to deep center against Ryan Thompson in the seventh but was thrown out at the plate by Kiermaier on Vazquez's single.

The seventh ended when Vazquez got picked off second by Mejia.

Rays reliever Diego Castillo said through a translator that he wasn't worried when umpires confiscated his cap due to a discolored spot before pitching the ninth Wednesday night because there were no illegal substances on it.

''That's the hat I've been using all season,'' Castillo said. ''I think it was just worn out because of the rosin I had consistently touching it.''

Castillo said the cap was returned to him but he can't wear it.

Los Angeles Angels manager Joe Maddon, who led the Rays to the 2008 AL pennant, will manage his second series at Tampa Bay as an opposing skipper this weekend and first since being with Chicago Cubs in September 2017.

The Red Sox will honor Dustin Pedroia during pregame ceremonies before Friday night's game against the New York Yankees. Pedroia spent his entire 17-year pro career in the Boston organization.