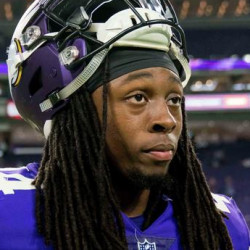 The Denver Broncos have designated running back Mike Boone (ankle) to return from Injured Reserve. The Broncos now have 21 days to elevate Boone to the active roster. Boone was able to practice on Wednesday and, if activated, will be eligible to suit up on Sunday for the first time since suffering an ankle injury in Week 7. The 27-year-old should have an opportunity to make an impact immediately upon his return as Latavius Murray and Marlon Mack are currently the only running backs on Denver's roster. Boone could be worth stashing for the stretch run, specifically in PPR formats.

The Denver Broncos placed running back Mike Boone (ankle) on Injured Reserve on Monday, so he'll miss at least the next four games after getting injured in the Week 7 loss to the New York Jets. The team also signed running back Marlon Mack off the San Francisco 49ers' practice squad. Boone had four carries for 23 yards on Sunday against the Jets before leaving the game with his injury. With the 27-year-old out for the next four games, the Broncos will rotate their backfield with Melvin Gordon III and Latavius Murray. Given how poor Denver's offense has been through seven weeks in 2022, both Gordon and Murray should be considered low-upside, touchdown-dependent RB3/flex options in fantasy.

Denver Broncos running back Mike Boone (ankle) will miss a few weeks after suffering an injury in the loss to the New York Jets. With Boone and Javonte Williams (knee) out of the picture, this backfield will be a combination of Melvin Gordon and Latavius Murray. For now, Murray looks to be the more desirable option as the more efficient runner and the back who gets the goal line opportunities. This could be a situation that changes each week, though. Boone is probably droppable in most leagues after failing to make an impact and now picking up an injury.

X-rays on Denver Broncos running back Mike Boone (ankle) came back negative after he was injured in the Week 7 loss to the New York Jets on Sunday. More will be known after he undergoes an MRI exam on Monday morning, but it looks like he's avoided a serious injury for now. Boone had four carries on the day for 23 yards, serving as the third backfield option behind Melvin Gordon III and Latavius Murray. He wasn't targeted in the passing game at all. The 27-year-old entered this weekend with just 11 carries for 59 yards while catching six of 12 targets for 61 yards in six games played. With Murray now the team's RB2 behind Gordon, Boone has no business being on fantasy rosters in 12-team leagues.

Denver Broncos running back Mike Boone (ankle) will not return to Sunday's meeting against the New York Jets. The veteran was leading the backfield before his premature exit, amassing four carries for 23 yards. As a result, Melvin Gordon III and Latavius Murray, who found the end zone in Week 7, should carry the load the rest of the way.

Denver Broncos running backs Melvin Gordon III (neck, ribs) and Mike Boone (foot) are both active on Monday night against the division-rival Los Angeles Chargers. Gordon came in with a questionable tag after being limited in practice all week, while Boone was removed from the report on Saturday and two straight days of full practice. Latavius Murray, who was recently signed off the Saints practice squad, will make his Denver debut as RB depth behind both Gordon and Boone. With Javonte Williams (knee) done for the rest of the season, Gordon should continue to operate as the Broncos' lead back. He has RB2 upside to close out Week 6 action against his old squad.

Denver Broncos running back Mike Boone (foot) was a full participant in practice on Saturday and does not carry an injury designation into Week 6 versus the Los Angeles Chargers. Boone is expected to back up Melvin Gordon (ribs, neck), who is listed as questionable but has optimism about his availability. In such a scenario, Boone would fall into the RB4 range in fantasy football. He looked solid last week, totaling 38 rushing yards and 47 receiving yards.

Denver Broncos running back Mike Boone (foot) practiced fully on Friday. He logged a limited session on Thursday, so he's seemingly trending in the right direction ahead of Monday night's matchup against the Los Angeles Chargers. The 27-year-old was expected to see an uptick in snaps behind Melvin Gordon III (neck) after Javonte Williams (knee) went down for the year. However, with the Broncos signing Latavius Murray off the practice squad, Boone's outlook in Week 6 (assuming he plays) isn't as promising, even if Gordon can't suit up.

Denver Broncos running back Mike Boone (foot) was limited in Thursday's practice. He will have two more chances to log a full practice ahead of Monday's game against the Los Angeles Chargers. The 27-year-old carried the ball seven times for 38 yards while catching all three of his targets for 47 yards in the Week 5 loss against the Indianapolis Colts. Boone will continue to compliment Melvin Gordon III but could lose touches to Latavius Murray, who was acquired by the Broncos last week, making him mainly an option in deep-league PPR formats.

Denver Broncos running back Mike Boone had a pretty solid effort on Thursday night against the Indianapolis Colts in the team's Week 5 loss. In his first game in an elevated role with Javonte Williams (knee) out for the year, Boone carried the ball seven times for 38 yards (5.4 yard-per-carry average) while catching all three of his targets for 47 yards. He played a season-high 41 percent of the offensive snaps behind Melvin Gordon III. The 27-year-old could be worth a look as a flex play in deeper PPR leagues going forward, although veteran Latavius Murray might eventually eat into Boone's role once he gets acclimated to the Broncos' playbook after just signing this week.

Denver Broncos running back Mike Boone will have a larger role in Week 5 against the Indianapolis Colts on Thursday night and for the rest of the season after lead back Javonte Williams (knee) suffered a season-ending torn ACL in the Week 4 loss to the Las Vegas Raiders. Melvin Gordon III is fully expected to lead Denver's backfield going forward, and the team also signed veteran Latavius Murray off the Saints practice squad this week. Boone rushed for 20 yards on three carries against the Raiders, but he also struggled in pass protection. The 27-year-old might be worth a waiver-wire pickup for RB depth in deeper leagues, but he'll be an RB4/flex, at best, on Thursday night behind Gordon. If Gordon continues to have fumbling issues -- he's fumbled five times in the team's last five games -- Boone's role could grow.

Dynasty | With Javonte Williams out for the season, Mike Boone is in line for an increased role. Dynasty Analysis: While many dynasty managers are going to be on the hunt for shares of Melvin Gordon, Boone is going to come much cheaper and could end up being the waiver wire darling of 2022 in the process. Gordon has had fumbling problems again this season and Boone actually played more snaps than Gordon this week after Williams went down with his knee injury. Boone's ADP is going to skyrocket over the next few days as he's currently outside the top 90 running backs.

Denver Broncos running back Mike Boone saw four touches in the 32-23 Week 4 loss to the division-rival Las Vegas Raiders on Sunday. With Javonte Williams (knee) getting injured and Melvin Gordon III in the doghouse after losing a fumble that was returned for a touchdown, Boone saw an elevated role in this one. He carried the ball three times for 20 yards and caught one of his three targets in the passing game for a nine-yard gain. It's believed that Williams is dealing with a serious knee injury, so Boone could be in line for much more playing time moving forward alongside Gordon, starting in a Week 5 matchup against the Indianapolis Colts on Thursday Night Football. The 27-year-old is worth consideration as a waiver-wire pickup in deeper leagues, depending on how serious Williams' knee injury actually is.

Denver Broncos running back Mike Boone tied for the team high in carries in Saturday's preseason game against the Buffalo Bills, carrying the ball five times for just 11 yards (2.2 yards per carry). He also caught his only target for 13 yards. Stevie Scott III also had five carries in the game, gaining just 13 yards, while he caught three of five targets for 10 yards. Denver's ground game was pretty non-existent in the 42-15 blowout loss to Buffalo. Boone should enter the 2022 regular season as Denver's No. 3 running back behind Javonte Williams and Melvin Gordon III, leaving him virtually zero fantasy appeal. He got a late start last year due to an injury and was scarcely involved when he returned, finishing with only four carries for 35 yards in eight games in his first year with the Broncos in 2021.