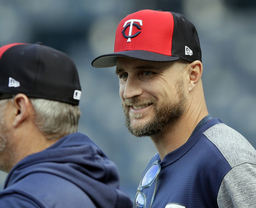 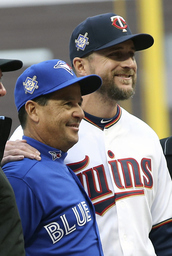 MINNEAPOLIS (AP) Last year, when Rocco Baldelli and Charlie Montoyo were coaches for the Tampa Bay Rays, Montoyo placed a Toronto Blue Jays media guide in Baldelli's locker one day to rib him about a potential managerial opening.

An adept communicator with the mind of a millennial working for an innovative organization like the Rays, Baldelli was on track to be one of the hot candidates once the offseason firing-hiring cycle began.

Sure enough, Baldelli interviewed with five teams before taking the job with the Minnesota Twins . Naturally, Montoyo was the one who landed with the Blue Jays . These old friends, a constantly teasing odd couple of sorts during their time with the Rays, are facing each other for the first time this week as rookie managers during a four-game series between Toronto and Minnesota.

''The trend in baseball was looking for guys like him, so the whole time I was messing with him,'' Montoyo said Monday. ''We made a deal: `If I get interviewed before you do, I'm going to tell you the questions.'''

Neither Baldelli nor Montoyo needed the insight, as it turned out. They were both hired on Oct. 25.

Montoyo, who managed at every minor league level for the Rays over 18 seasons, joined their major league staff in 2015. In 2002, with Class A Bakersfield, he met Baldelli, who was then a 20-year-old prospect in what turned out to be his final minor league season. The two have been close ever since.

''He's my boy. I hope I win the next four, and I hope he wins the next 10 without me here,'' Montoyo said, adding: ''He's like my son, but then he's like my brother. We fight and then we make fun of each other. Yeah, he's one of my best friends in baseball for sure.''

Baldelli, the youngest manager in the majors, spent all but one season of his professional playing career with the Rays. He joined their front office in 2011 and then the coaching staff in 2015, impressing Montoyo and Rays manager Kevin Cash with his strategic acumen.

''I was like, `Man, that's pretty good for not managing anywhere,''' Montoyo said.

Baldelli was asked if he planned any pranks for his counterpart down the hall. Not yet, was his official stance.

''But it's a four-game stand. We could possibly see some stuff,'' Baldelli said.

When the razzing turns serious and the rookie skippers are able to catch up, they'll talk politics, family or whatever else is on their minds. In Montoyo, Baldelli sees a minor league lifer who never lost sight of his goal or his roots.

''He's never wavered from what he's believed in, and he works very hard and he doesn't get down too often,'' Baldelli said. ''He just continues to go out there and does what he thinks is right every day. And getting a chance to watch him do that for years on end, it's both impressive and, I'd like to do that when I grow up.''