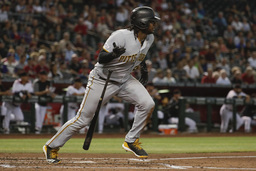 Pittsburgh Pirates' Josh Bell watches his double against the Arizona Diamondbacks during the second inning of a baseball game in Phoenix, Wednesday, May 15, 2019. (AP Photo/Matt York) 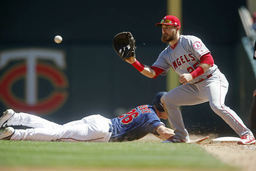 Atlanta prospect Austin Riley was quite a hit in his big league debut, connecting for a home run in his second at-bat. The 22-year-old Riley tagged Michael Wacha in a win over St. Louis.

Riley was promoted from Triple-A, where he was leading the International League with 15 homers and 39 RBIs. Normally a third baseman, he started in left field Wednesday night and figures to see time there for a while.

His homer came in front of his parents and a group of 40 family and friends who quickly made the drive from his native Mississippi to SunTrust Park.

Riley and the Braves wrap up the series against Cardinals star Adam Wainwright.

Josh Bell brings his one-man power show to the West Coast when the Pittsburgh Pirates open a series in San Diego. Riding a career-best 15-game hitting streak, the switch-hitting first baseman is batting .333 with 12 homers, 14 doubles and 39 RBIs in a bounce-back season.

Shohei Ohtani and his two-way skills have some company in the Angels' clubhouse. Called up from the minors, Jared Walsh hit three singles in his major league debut Wednesday while playing first base at Minnesota. Walsh, who like Ohtani is a pitcher and a hitter, was a 39th-round draft pick in 2015. He batted .302 with 10 homers and 26 RBIs in 37 games for Triple-A Salt Lake and allowed two runs in five innings as a left-handed reliever.

Tigers star Miguel Cabrera could return to the lineup when Oakland begins a series at Comerica Park. He didn't play Wednesday night against Houston because of a sore knee, missing a chance to hit against former teammate Justin Verlander.

''I'm pretty sure he was chomping at the bit to get a piece of Verlander,'' Tigers manager Ron Gardenhire said. ''Sometimes that's not always a good antidote for soreness.''

Anibal Sanchez (0-6, 5.27 ERA) is still looking for his first win with the Nationals after signing a $19 million, two-year contract as a free agent last offseason.

The 35-year-old right-hander starts the rubber match of a three-game series against the NL East rival Mets. The only starting pitcher in Nationals history (2005-present) to open a season 0-7 was Jason Marquis in 2010. Zack Wheeler (3-2, 4.35) is on the mound for New York. He is 4-9 with a 5.01 ERA in 15 career starts against Washington.