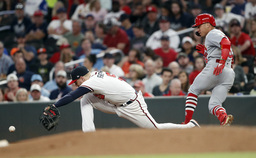 St. Louis Cardinals' Kolten Wong (16) is safe at first base with a single as the ball gets past Atlanta Braves first baseman Freddie Freeman (5) in the seventh inning of a baseball game Wednesday, May 15, 2019, in Atlanta. (AP Photo/John Bazemore) 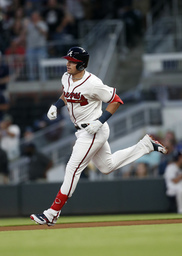 Atlanta Braves' rookie Austin Riley rounds the bases after hitting a home run in the fourth inning of a baseball game against the St. Louis Cardinals Wednesday, May 15, 2019, in Atlanta. It was Riley's first Major League hit. (AP Photo/John Bazemore) 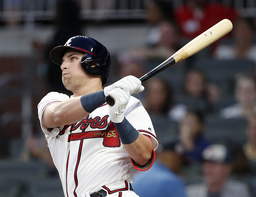 Atlanta Braves' rookie Austin Riley follows through on a home run in the fourth inning of a baseball game against the St. Louis Cardinals Wednesday, May 15, 2019, in Atlanta. It was Riley's first Major League hit. (AP Photo/John Bazemore) 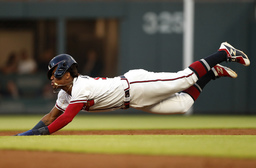 Atlanta Braves' Ronald Acuna Jr. (13) dives head first as he steals second base in the third inning of a baseball game against the St. Louis Cardinals Wednesday, May 15, 2019, in Atlanta. (AP Photo/John Bazemore) 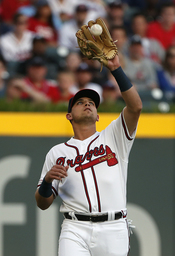 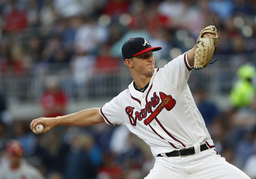 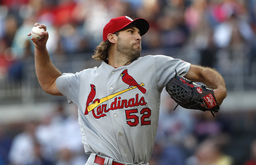 ATLANTA (AP) When Austin Riley connected with the pitch, his father was watching from the concourse at SunTrust Park.

Mike Riley knew it was good contact, but he couldn't tell how far the ball went.

Then he looked toward the outfield.

Austin Riley homered in his big league debut Wednesday night, leading Atlanta to a 4-0 victory over the St. Louis Cardinals and signaling the arrival of another top prospect for the Baby Braves.

''He's got lights-out power,'' said Hall of Famer Chipper Jones, who played his entire career with the Braves and was at the game. ''I think he's a 40-homer guy before it's all said and done in the big leagues.''

Mike Soroka turned in another strong start with three-hit ball over seven scoreless innings, but this night belonged to the 22-year-old Riley. He was called up from Triple-A Gwinnett before the game after Ender Inciarte went on the injured list with a sore back.

Riley, who started in left field and batted sixth, struck out swinging against Michael Wacha in the first at-bat of what the Braves hope will be a long major league career.

Then, leading off the fourth, Riley showed why he was leading the International League with 15 homers and 39 RBIs.

Riley launched a high fastball deep into the left-field seats, a 438-foot drive that gave the Braves a 2-0 lead and sent his parents and a group of about 40 family and friends - many of whom hastily made the drive from his native Mississippi - into a delirious celebration.

''I'm speechless,'' Riley said, struggling to find the words. ''That second at-bat, I figured he was going to challenge me a little bit. I was able to put a good swing on it.''

Riley hit another drive to the edge of the warning track his next time up, and handled a couple of chances without any problem in left. Normally a third baseman, he figures to mostly play left field at least during his initial stint in the big leagues. Josh Donaldson is locked in at third base for 2019 with a one-year, $23 million deal.

After taking over as a defensive replacement for Riley, Charlie Culberson sealed the victory with a two-run homer in the eighth.

It was quite a showing for Atlanta's kids.

Even younger than Riley, the 21-year-old Soroka (4-1) lowered his ERA to 0.98 in six starts. The right-hander has yet to allow more than one earned run in any of his appearances, and this was his best one yet.

Soroka escaped a bases-loaded jam in the third, getting Paul Goldschmidt to ground into an inning-ending double play. He stared down another trouble spot in the sixth when the Cardinals put runners at second and third, fanning Jose Martinez to snuff out the threat.

''What I like about this kid is he doesn't panic. He just goes pitch to pitch,'' Braves manager Brian Snitker said. ''That's a great trait for a young pitcher to have.''

In the eighth, Dan Winkler walked the first two St. Louis hitters on eight pitches, but Luke Jackson worked out of the jam - this time, it was Paul DeJong hitting into a double play - and finished up for his fifth save in six chances.

Wacha (3-1) surrendered only four hits and one earned run over five innings.

''Anytime you've got somebody new coming in there, you don't really have too much video on that guy,'' Wacha said. ''Obviously, I didn't want to make that pitch where he ended up hitting the homer, but he didn't miss a mistake.''

Atlanta also scored when the Cardinals pitcher threw one away at third base after appearing to pick off Ronald Acuna Jr., who was able to trot home when the ball skidded under the glove of Matt Carpenter.

LUKE, YOU ARE OUR CLOSER

Jackson has been a godsend for Atlanta's shaky bullpen.

After giving up four runs in his first appearance of the season, he has surrendered just one over his past 19 innings and appears to be the closest thing the Braves have to a closer.

Cardinals: RHP Carlos Martinez (shoulder) threw two innings for Double-A Springfield in an 8-2 loss to Arkansas on Wednesday. He allowed one run on four hits and could rejoin St. Louis for a weekend series in Texas.

Braves: Inciarte went on the 10-day injured list with a lumbar strain. He left Tuesday night's game after experiencing tightness in his lower back.