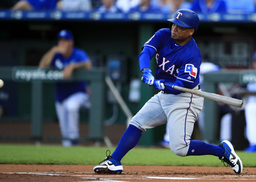 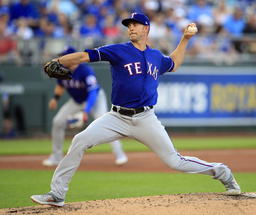 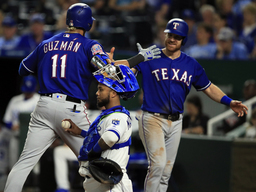 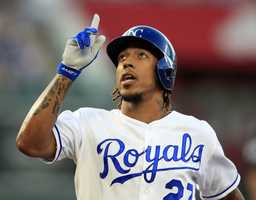 Kansas City Royals' Adalberto Mondesi gestures after his RBI single during the first inning of a baseball game against the Texas Rangers at Kauffman Stadium in Kansas City, Mo., Wednesday, May 15, 2019. (AP Photo/Orlin Wagner) 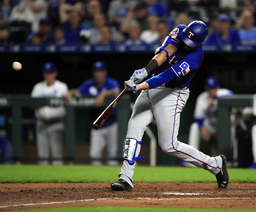 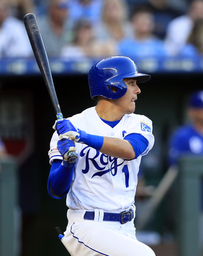 KANSAS CITY, Mo. (AP) Ronald Guzman and Willie Calhoun each hit a two-run homer, and the Texas Rangers cruised to a 6-1 victory over the Kansas City Royals on Wednesday night.

Shin-Soo Choo added a solo shot in the ninth inning and Nomar Mazara matched a career high with four hits as the Rangers snapped a five-game skid. They have won six of their last eight against Kansas City, including an 11-5 loss in the series opener Tuesday.

Mike Minor (4-3) got through five rocky innings, allowing one run on eight hits and two walks.

Guzman drove in a run in the fourth before sending a hanging pitch from Jorge Lopez (0-5) booming into the center field seats in the sixth. The two-out shot broke open a 3-1 game and sent Lopez, who had plunked two batters and struggled with command all night, trudging toward the showers.

Calhoun, called up from Triple-A Nashville before the game, got the Rangers off to a good start. The erstwhile elite prospect sent a first-inning pitch from Lopez soaring into the seats over the right-field bullpen, the no-doubt shot staking Texas to a 2-0 lead.

Kansas City answered by manufacturing a run in the bottom half against Minor, whose last appearance at Kauffman Stadium came as the Royals' closer in the final game of the 2017 season. But after Adalberto Mondesi's RBI single, the veteran left-hander escaped the rest of the inning unscathed.

It wasn't the last time he negotiated trouble.

Minor also stranded runners on second and third in the second and fourth, and he pinned another runner 90 feet from home in the fifth. By the time that inning ending, Minor had survived a shaky night and has still allowed just 11 earned runs over his last 55 innings.

The Rangers' bullpen allowed only one hit over the final four innings.

Texas put shortstop Elvis Andrus on the injured list with a strained right hamstring after he left Tuesday night's game in the seventh inning. Rangers manager Chris Woodward is hopeful Andrus will be ready to return in 10 days. ''You don't want this to linger with him,'' Woodward said.

Calhoun was joined from Nashville by left-hander Jeffrey Springs to provide a fresh arm in the Texas bullpen. Right-hander Wei-Chieh Huang was optioned to the same club.

Rangers right-hander Shawn Kelley could be activated in the next couple of days, Woodward said. Kelley has been dealing with a bacterial infection. ... Woodward said right-hander Ariel Jurado will likely start Saturday against St. Louis. Woodward plans to get ''creative'' with the starter Sunday because left-hander Drew Smyly has a slight ankle sprain and his next turn could get pushed back a couple of days.

The Royals wrap up their homestand Thursday by sending Homer Bailey (4-3, 4.83 ERA) to the mound against Texas. The Rangers counter with fellow right-hander Lance Lynn (4-3, 5.48).