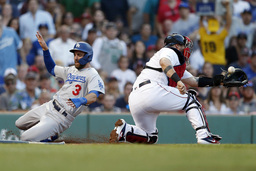 The Dodgers made the move before a 16-2 win over the Phillies on Monday.

Taylor was hit on the forearm by a fastball by Boston's Heath Hembree on Sunday in a 7-4, 12-inning win over the Red Sox.

Taylor led off in three of the previous four games. He's batting .261 with eight homers and 41 RBIs and has started at second base, shortstop, left field and center field this season.