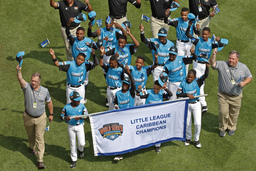 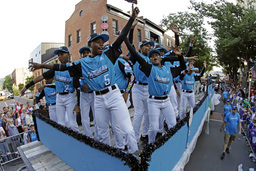 He hadn't received much of one from an overmatched Australian team, which trailed Jurdrick's group from Curacao, 10-0, in the third inning Thursday in the Little League World Series' opening game.

So Jurdrick found a way to test himself.

Standing on third base as the Australian pitcher held the ball in his glove, Jurdrick broke for the plate. He was there before the Austrailians could even make a throw, sliding in for the final run of an 11-0 blowout.

''I asked the manager, and he laughed,'' Jurdrick said with a big smile. ''Neither the pitcher or the catcher looked, so I went for it.''

Just about everything that Curacao tried worked out against Australia. Shendrion Martinus threw a no-hitter, walking just one batter over the course of a four-inning game shortened by Little League's mercy rule.

The victors notched 10 hits, and Curley Martha punctuated the rout with a two-run homer.

It was just the latest example of a thriving baseball culture on Curacao, a 171-square-mile island not far from Venezuela's coast.

The island has produced stars such as Atlanta Braves second baseman Ozzie Albies, Los Angeles Dodgers reliever Kenley Jansen and Jurdrick's big brother, Jurickson. They're among the 11 current and former big leaguers born in the town of Willemstad, the same place these little leaguers call home.

This is Pabao Little League's ninth trip to the Little League World Series, and the 13th time a team from Curacao has been represented.

Pabao outlasted Caribbean powerhouses Puerto Rico and the Dominican Republic - along with new Little League country Cuba - to get here.

In fact, its greatest threat came from another Curacao Little League team. Pabao bested Pariba in the Carribean Regional championship game, 8-3. Together, the two Curacao teams went 11-0 against the competition.

That kind of Little League dominance has been reinforced by big league success.

Players including Andruw Jones, Andrelton Simmons and Jonathan Schoop have provided examples for kids on the island, showing them where baseball can take them if they put in the work.

''The kids are very interested to see them play, and have the urge to play baseball,'' Curacao manager Michelangelo Celestina said, adding that they derive a bit of satisfaction from beating larger countries.

Jurdrick Profar is the charisma and the muscle behind this Curacao team.

At 5-foot-9, 148 pounds, Jurdrick, who started at catcher in Curacao's first game, has one of the most powerful frames in the tournament. Celestina said Jurdrick will be the starting pitcher Sunday when Curacao takes on Little League power South Korea.

Jurdrick also benefits from his bloodline. Two of his older bothers, Jurickson and Juremi, made stops at the Little League World Series on their way to professional baseball careers.

Jurickson won an LLWS title for Curacao in 2004, and then made a return trip in 2005, when his team lost to Hawaii in the title game. He now plays second base for the Oakland Athletics.

Juremi, who plays in the Texas Rangers organization, played for Curacao in 2007 and 2008 in South Williamsport.

Jurdrick speaks with them almost every day.

Asked if he had received any advice from his brothers, Jurdrick said they kept it simple.

''Just keep your eye on the ball, never take your eye off it, and just have fun,'' he said.

The Little League World Series began with a pair of pitching staffs asserting themselves. The first two games of the event finished with no-hitters, starting with Martinus's effort against Australia. The next morning, after rain washed out the rest of Thursday's schedule, Virginia used three pitchers - Justin Lee, Liam Thyen and Chase Obstgarten - to blank Rhode Island in the hit column.

Diagnosed with leukemia, Jenn Bloom was cleared to travel to watch the Minnesota team that includes her son, Dylan, and is coached by her husband, Greg. During a live interview with ESPN, Dylan scored the first run of a game between Minnesota and Kentucky, causing Jenn to become emotional as she discussed her son's success, her journey and Greg's parenting help during her illness. ''This is why we do this,'' she said. Minnesota went on to win, 2-1.