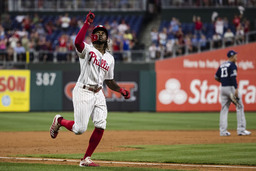 Quinn was hurt trying to beat out a grounder in the eighth inning of the Phillies' 8-4 victory over the San Diego Padres on Friday night. He is batting .213 with three doubles, four homers and 11 RBIs in 44 games.

To replace Quinn, Philadelphia activated right-handed reliever Jared Hughes after claiming him off waivers from Cincinnati earlier this week. Hughes went 3-4 with a 4.10 ERA in 47 games with the Reds this season.