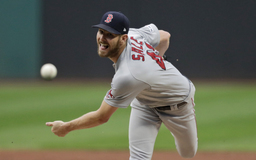 President Dave Dombrowski said Saturday that Sale had an MRI and the team's doctors said the results revealed inflammation.

Dombrowski also said Sale felt stiffness after his start Tuesday in Cleveland and didn't tell the team until Friday, so he was sent for the test. In addition to the team's doctors, Dombrowski said Sale will also have the results looked at by orthopedist Dr. James Andrews, but it wasn't expected to be until Monday. Dombrowski wasn't certain if Sale would visit Andrews.

The Red Sox said Sale was not available for comment.

Struggling through a mediocre season, Sale is 6-11 with a 4.40 ERA, but he was coming off two solid starts in which he combined for 25 strikeouts - including the 2,000th of his career - and allowed only three runs in 14 2/3 innings.

To fill his spot on the roster, the club recalled right-hander Ryan Brasier from Triple-A Pawtucket.