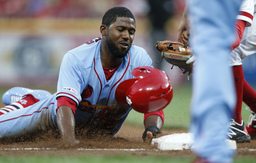 St. Louis Cardinals' Dexter Fowler is tagged out at third base by Cincinnati Reds' Jose Peraza trying to advance on a single by Marcell Ozuna during the fifth inning of a baseball game Saturday, Aug. 17, 2019, in Cincinnati. (AP Photo/Gary Landers) 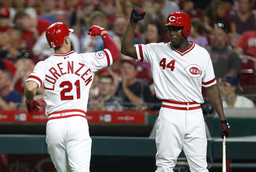 Cincinnati Reds' Michael Lorenzen (21) is congratulated by Aristides Aquino after scoring during the seventh inning of the team's baseball game against the St. Louis Cardinals, Saturday, Aug. 17, 2019, in Cincinnati. (AP Photo/Gary Landers) 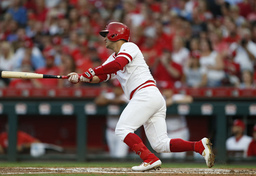 CINCINNATI (AP) Aristides Aquino hit a three-run homer, Nick Senzel added a leadoff shot and the Cincinnati Reds dropped the St. Louis Cardinals back into a tie with Chicago for first place in the Central Division with a 6-1 victory on Saturday.

With the Reds leading 2-1 in the fifth, Aquino followed two-out singles by Josh VanMeter and Freddy Galvis with a no-doubt drive to center field on Milos Mikolas' first pitch for his 11th homer in his 17th career game.

Aquino is the first rookie since 1900 with 11 homers in his first 17 games, according to the Elias Sports Bureau.

One day after being rocked for 18 hits and 13 runs, Cincinnati pitching limited St. Louis to Matt Carpenter's second-inning solo homer, one of five hits and three walks allowed by Anthony DeSclafani in five innings. DeSclafani (8-7) struck out four.

The Cardinals loaded the bases against Lucas Sims with one out in the sixth, but he struck out pinch-hitter Paul DeJong and got Dexter Fowler to pop up.

Michael Lorenzen allowed one hit and had three strikeouts in two innings. He also had two hits. R.J. Alaniz finished up.

The Reds roughed up Mikolas (7-13) for seven hits and five runs with two walks and five strikeouts in five innings. He is 1-4 over his last six starts.

Senzel led off the bottom of the first with his third leadoff home run and 10th overall.

Reds: RHP Tyler Mahle (left hamstring strain) allowed three runs on three hits with a walk and two strikeouts while throwing 37 pitches in 1 1/3 innings in the first appearance of his rehab assignment with Triple-A Louisville on Friday.

Cardinals: RHP Jack Flaherty (6-6) has allowed 10 hits and three walks with 11 strikeouts in 11 1/3 shutout innings over two starts against Cincinnati this season.

Reds: LHP Alex Wood (1-1) has issued three walks and amassed 15 strikeouts in 19 1/3 innings over his first four starts since coming off the injured list on July 28.