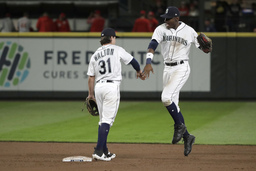 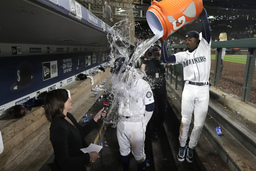 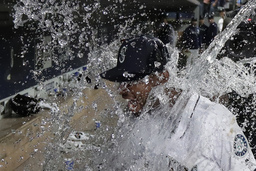 Seattle Mariners right fielder Kyle Lewis is doused with water by a teammate as he takes part in an interview following the team's baseball game against the Cincinnati Reds, Tuesday, Sept. 10, 2019, in Seattle. Lewis hit a solo home run in his major league debut as the Mariners won 4-3. (AP Photo/Ted S. Warren) 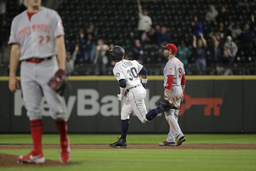 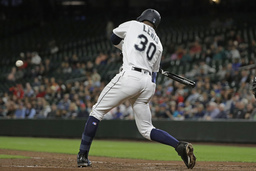 Seattle Mariners' Kyle Lewis begins his swing on a solo home run during the fifth inning of the team's baseball game against the Cincinnati Reds, Tuesday, Sept. 10, 2019, in Seattle during the second at-bat of his debut in the majors. (AP Photo/Ted S. Warren)

SEATTLE (AP) The rebuilding Seattle Mariners have spent the last year talking about the future. They got to see a glimpse of it during a 4-3 win over the Cincinnati Reds on Tuesday night as nine rookies played and contributed heavily to the victory.

Kyle Lewis hit a towering home run on the day he was called up to the big leagues. Justus Sheffield pitched his longest outing of the season. And Dylan Moore helped the team turn four double plays and hit his own homer.

The 31-year-old Seager hit a two-run homer in the eighth inning as the Mariners ended a six-game losing streak.

But it was the rookies who grabbed the attention.

Lewis, a 24-year-old outfielder who was one of four players called up Tuesday from Double-A Arkansas, collected the team's first hit against Trevor Bauer in the fifth inning.

Lewis was just the fifth Mariners player to hit a home run in his debut and the first since 2006. The drive, measured at 426 feet by Statcast, tied the score at 1.

''I was just trying to keep it as simple as possible, try not to make things bigger than they are,'' Lewis said. ''When I hit that, though, it was definitely like an out-of-body experience.''

Two other rookies homered: Moore gave the Mariners a 2-1 lead in the sixth against Bauer with his eighth home run.

Cincinnati's Brian O'Grady, who debuted on Aug. 8, put the Reds ahead 3-2 in the eighth with his first homer. O'Grady pinch-hit and had a two-run drive off Austin Adams.

Michael Lorenzen walked Austin Nola with one out in the eighth. Amir Garrett (4-3) entered, and Seager drove Garrett's seventh consecutive slider over the right field wall.

Dan Altavilla (1-0) pitched around a leadoff walk in the eighth for his first big league win since May 18 last year against Detroit. Anthony Bass tossed a perfect ninth for his third save.

Sheffield pitched six innings, striking out four and allowing just one run - on an RBI single from Freddy Galvis - on seven hits. The left-hander earned his first quality start and has struck out 11 in 11 innings in his last two starts.

Though he allowed 10 baserunners, the Mariners picked him up with four double plays. Sheffield started one of those on his own and also cleanly fielded two comebackers for outs.

''The confidence is growing, and you can see him making pitches and slowing things down when he needs to,'' Seattle manager Scott Servais said. ''He's relaxed, he's getting back to doing what he's doing, and trusts his ability at this level, and it's great he's getting the result right now, too.''

Bauer had a no-hitter through 5 1/3 innings and finished with eight strikeouts and three walks in 6 1/3 innings. He was pulled after 116 pitches.

''We read the ball early and had quite a few hits,'' Reds manager David Bell said. ''Then the double plays got us.''

Bell spent the off-day Monday visiting old haunts and marveling at how Seattle's changed in the nearly two decades since he was with the Mariners.

''I think about him all the time doing this job,'' Bell said. ''I learned a lot from him I didn't even realize while I was playing for him. He had the ability to make every game like the seventh game of the World Series. He was a winner and he would not accept anything less from every person in the clubhouse than their absolute best every day. He had a way of motivating through his own expectations.''

In addition to Lewis, Seattle promoted Lewis, RHPs Justin Dunn and Art Warren and SS Donnie Walton. Warren teared up in front of reporters while describing the clubhouse celebration in Arkansas when players received the news. OF Ryan Court was designated for assignment.

Lewis and Walton made their major league debuts, pushing Seattle to a couple of records. The Mariners have now used 65 players this season, snapping Texas' 2015 record of 64. And 19 rookies have debuted for the team this year, one more than the Rangers in 2015.

Reds: Nick Senzel (right shoulder) has not played the outfield since Sept. 3 but could pinch run. ''We had to make a deal with him,'' Bell said.

Mariners: Servais said SS J.P. Crawford (strained left hamstring) could return this weekend against the Chicago White Sox. ... Rookie CF Jake Fraley (right thumb), who hasn't played since Saturday, had an MRI on Monday but Servais said he did not have an update.