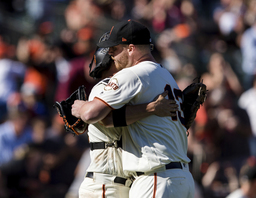 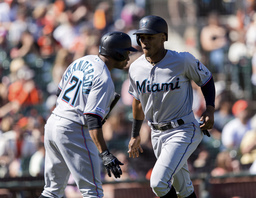 Miami Marlins' Magneuris Sierra, right, celebrates with Curtis Granderson (21) after he scores a run against the San Francisco Giants in the seventh inning of a baseball game in San Francisco, Sunday, Sept. 15, 2019. (AP Photo/John Hefti) 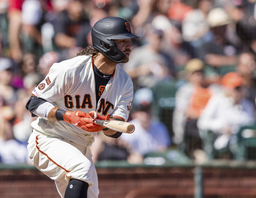 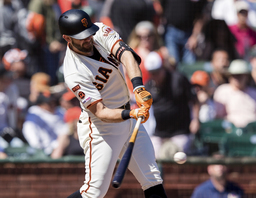 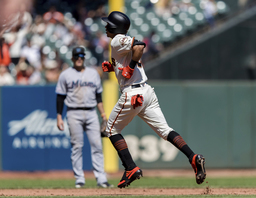 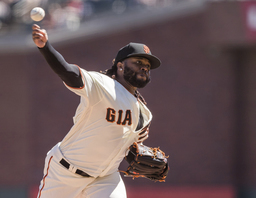 Dubon connected leading off the third against starter Elieser Hernandez to break a scoreless tie. Dubon connected on a 1-0 slider that just cleared wall in left for his third homer.

Cueto gave up three hits, struck out two and walked two. The two-time All-Star has combined for 10 innings of four-hit ball in his two starts since coming off the injured list.

Giants reliever Tyler Rogers (2-0) struck out one in a 1-2-3 eighth for the win, and Will Smith worked around a walk and a wild pitch in the ninth for his 33rd save in 37 tries. The All-Star closer had been out since Sept. 6 with back tightness.

Jon Berti had two hits and one RBI and made a great defensive play for the Marlins, who have lost six of seven and are 11-34 since July 30.

Hernandez struck out a career-high nine in five innings of three-hit ball. He gave up one run and walked one.

The Marlins tied the game in the seventh on Berti's two-out, RBI single, which scored Magneuris Sierra from third. Sierra reached on a two-out infield hit and went to third on third baseman Evan Longoria's throwing error.

Giants first baseman Belt bunted down the third base line against the shift for a hit leading off the sixth.

Berti made a leaping catch in left field, crashing into the top of the wall to rob Longoria of extra bases in the bottom of the first.

Marlins: RHP Jordan Yamamoto (right forearm strain) will pitch in an instructional league game on Monday and could join the rotation before the end of the season, manager Don Mattingly said.

Giants: OF Alex Dickerson (right oblique) appeared in Sunday's game as a pinch hitter and struck out in his only at-bat the fifth. Dickerson hadn't played since Sept. 3. ... Center fielder Kevin Pillar got an off day.

Marlins: RHP Pablo Lopez (5-8, 4.97 ERA) will open Monday's series opener against the Diamondbacks in Arizona. Lopez is 0-3 with a 7.91 ERA over his last four starts.