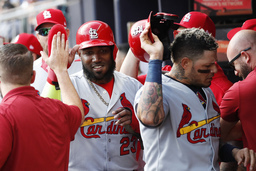 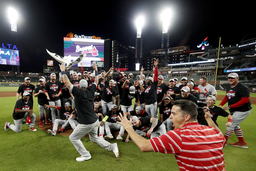 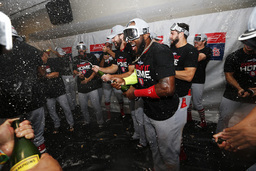 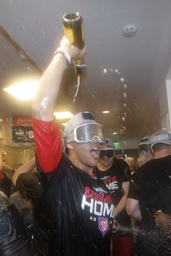 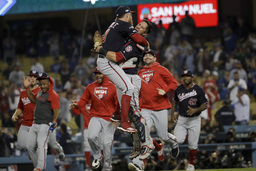 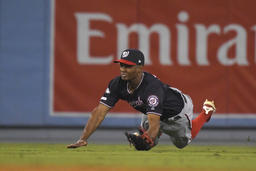 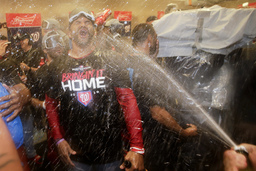 Washington Nationals manager Dave Martinez celebrates in the locker room after the Nationals' 7-3 win in 10 innings against the Los Angeles Dodgers in Game 5 of a baseball National League Division Series on Wednesday, Oct. 9, 2019, in Los Angeles. (AP Photo/Marcio Jose Sanchez) 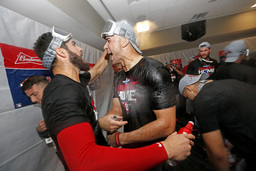 With the top teams out of the mix, it's on to a most unlikely match-up in the NL Championship Series.

The St. Louis Cardinals are back in the NLCS for the first time since 2014 after a stunner of an inning in Atlanta.

They'll face the Washington Nationals, who dispatched their playoff demons with a shocking upset of the 106-win Dodgers.

''We know we can beat anyone at this point,'' St. Louis second baseman Kolten Wong said.

The best-of-seven series begins Friday night at Busch Stadium. This was the first time since 2015 that both of a league's top seeds were eliminated in the division series.

St. Louis was within four outs of elimination against the Braves in Game 4, but bounced back for a 10th-inning victory.

The deciding game in Atlanta was over not long after it started.

The Cardinals became the first team in baseball history to score 10 runs in the opening inning of a postseason game and went on to a 13-1 victory.

''It felt like we blinked and the next thing you know, it's 10-0,'' third baseman Matt Carpenter said.

Washington's run to the NLCS has been truly improbable, especially for a franchise that had never won a playoff series during its previous incarnation as the Montreal Expos or since moving to the nation's capital in 2005.

In five previous postseason appearances, the Expos-slash-Nats came up short every time - usually in excruciating fashion.

Just making the playoffs didn't seem likely after Washington lost the face of the franchise, Bryce Harper, in free agency and then got off to a 19-31 start.

But the Nationals went 74-38 the rest of the way to claim a playoff spot, rallied from three runs down to beat Milwaukee 4-3 in the wild-card game, and then pulled off another escape job against the mighty Dodgers in the NLDS.

After again falling behind 3-0, Anthony Rendon and Juan Soto tied it with back-to-back homers off Clayton Kershaw. The Nationals won it in the 10th on Howie Kendrick's grand slam, becoming the first team to rally from three-run deficits in a pair of deciding games during the same postseason.

The year of the comeback, indeed.

Some things to watch for in the NLCS:

The Cardinals got huge production out of their third and fourth hitters in the victory over the Braves.

Paul Goldschmidt and Marcell Ozuna both batted .429 (9 of 21) in the series, each hitting a pair of homers and driving in a total of seven runs.

Washington has its own big bopper, MVP candidate Rendon.

The third baseman put up huge numbers during the regular season, batting .319 with 34 home runs and 126 RBIs. He kept up his torrid pace in the NLDS by hitting .412 (7 of 17) with one homer and five RBIs.

The Nationals have three.

Then there's the Washington bullpen. In both the wild-card game and the best-of-five NLDS, the Nationals used Strasburg, Scherzer and Corbin in relief to cover for a relieving corps that had the worst ERA in the big leagues during the regular season (5.66).

That may not be an option in the NLCS, which will put the heat on pitchers such as Sean Doolittle (29 saves but a 4.05 ERA) and Daniel Hudson (six saves and a 1.44 ERA after being acquired from Toronto at the trade deadline).

So far in the postseason, Washington's regular relievers have allowed eight runs and 15 hits in 13 innings, an ERA of 5.54 that is pretty much right in line with their struggles over 162 games.

The Cardinals' rotation is not as deep as Washington's, but they do have Jack Flaherty.

Flaherty got the win in the clinching game at Atlanta and finished the NLDS with 16 strikeouts in 13 innings, all while following the mantra ''Don't Think.''

He displays that philosophy on T-shirts, on his cleats, and all over his social media accounts.

Washington is trying to become only the third wild-card team to reach the World Series since MLB went to a 10-team playoff format in 2012.

In 2014, San Francisco and Kansas City both made it through after starting the postseason with victories in the wild-card game.

The Giants beat the Royals for the title in a seven-game thriller.