LEADING OFF: Paxton vs Verlander in ALCS, day off for NLCS 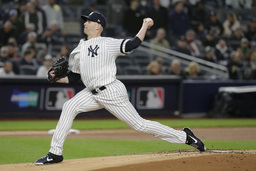 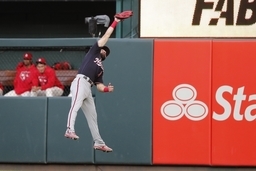 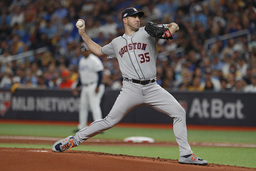 A look at what's happening around the majors Sunday:

Justin Verlander starts for Houston in Game 2 of the AL Championship Series, facing the Yankees at Minute Maid Park. Verlander led the majors with 21 wins this season and is 14-8 with a 3.20 ERA in postseason play.

But Verlander wasn't at his best earlier this week, chased in the fourth inning at Tampa Bay when the Astros had a chance to clinch the AL Division Series. That game came when Verlander started on three days' rest - he'd done that just one before, after a rain-shortened outing in the 2011 playoffs.

Verlander will be on regular rest when he faces James Paxton. The New York lefty made his first postseason start last week in the ALDS opener against the Twins and was driven out in the fifth inning.

Stephen Strasburg and his Washington teammates get a day off before resuming the NL Championship Series with a 2-0 lead. Strasburg starts Game 3 on Monday night at Nationals Park against Jack Flaherty and the Cardinals.

Starters Max Scherzer and Anibal Sanchez and the Washington relievers allowed a total of four hits while winning the first two games at Busch Stadium.

Cardinals manager Mike Shildt and St. Louis' analytics department are wondering what happened to the juiced baseball. Shildt said the team's front office has found the ball is flying 4 + fewer feet on average in the postseason, raising more questions about the makeup of the baseballs after hitters clubbed a record 6,776 home runs in the regular season - a rise attributed to unusually far-flying balls.

The numbers don't leave much doubt, says data journalist Rob Arthur. He was among the first to suggest tweaks to the ball may have caused home runs to spike as early as 2015, and he thinks something is off with this year's October model, too. Arthur published a story Thursday at Baseball Prospectus showing the postseason balls have more air resistance than the regular season balls, according to data pulled from MLB's own tracking system. Arthur projected home runs were down 50% through Wednesday's games compared to what would have been expected in the 2019 scoring environment.